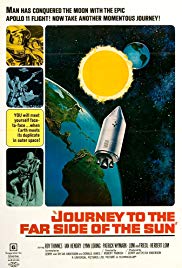 Storyline:
A planet is discovered in the same orbit as Earth’s but is located on the exact opposite side of the sun, making it not visible from Earth. The European Space Exploration Council decide to send American astronaut Glenn Ross and British scientist John Kane via spaceship to explore the other planet. After a disastrous crash-landing Ross awakes to learn that Kane lies near death and that they apparently have returned to Earth, as evidenced by the presence of the Council director and his staff. Released to the custody of his wife, he soon learns things are not as they seem.
Written by
Doug Sederberg <[email protected]>
User Reviews: ‘Journey To The Far Side Of The Sun’ is quite possibly the most underrated SF movie of the 1960s. It certainly has some flaws – especially the lack of character development, and a few ponderous sequences seemingly modeled on ‘2001: A Space Odyssey’, released the previous year – but if you overlook them you’ll find a quietly intelligent and fascinating movie that deserves to be rediscovered. The brains behind this movie were Gerry and Sylvia Anderson best remembered for their wildly entertaining marionette TV shows such as ‘The Thunderbirds’. This movie was their first foray into live action SF and in some ways was the precursor to their 1970s cult series ‘UFO’. Ed Bishop, George Sewell and some of the other supporting cast members went on from this movie to that TV show. The real stars however are Roy Thinnes, best known at the time for ‘The Invaders’, and Brit character actors Ian Hendry and Patrick Wymark. Hendry was the star of the little seen first series of ‘The Avengers’, and also appeared in Polanski’s disturbing ‘Repulsion’ (alongside Wymark), and the camp classic ‘Theatre Of Blood’ with horror legend Vincent Price. Wymark appeared in another Price movie ‘The Conqueror Worm’, and starred in ‘Blood On Satan’s Claw’. Thinnes, Hendry and Wymark are all very good in this movie, albeit a little too cold and remote for my liking, but that is obviously the script’s failing not the performers. I haven’t mentioned much about the plot of the movie wary of spoiling it for those who have never seen it. Suffice to say it involves the discovery of a hereto unknown planet in our solar system. The less you know about it after that the more you will enjoy it. Overall, despite the script problems and one or two other minor criticisms I highly recommend this movie to all SF fans who prefer ideas over action.

Storyline:A yakuza melodrama, covering decades in the lives of Boss Onimasa, his adopted daughter Matsue, and his biological daughter Hanako.User Reviews: Hideo Gosha's Onimasa (1982) comes across as Japan's answer to...