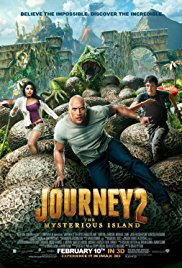 Storyline:
Ever since his adventure in the center of the Earth, Sean Anderson has been looking for other places mentioned by Verne and other Vernians. He is notified about a coded message, and breaks into a satellite facility to fully receive it. With the help from his stepfather Hank (Dwayne Johnson) he decodes the message leading him to find the map that leads him to Verne’s mysterious island. Along with Gabato and Kailani, Sean embarks on a mission to find his grandfather, the legendary Vernian Alexander. But unexpected problems arise as Alexander made a mistake that could change everything.
Written by
Anonymous User – Earth
User Reviews: "Journey 2: The Mysterious Island" is a blue-screen CGI extravaganza that is mixed in with the picturesque Hawaii locations, but containing a plot that is essentially all told in the trailer and presented with the dynamics of an amusement park tour. The "2" in "Journey 2" is because it is the sequel to the 2008 movie "Journey to the Center of the Earth"; the "The Mysterious Island" in the title because both movies are both derived from books by Jules Verne.

Watching "Journey 2" is like being stuck in a vacation with five slightly unpleasant people with slightly uncomfortable dynamics between. Sean (Hutcherson) is bratty and overly entitled, Hank (Johnson) his stepfather and Alexander (Caine) his grandfather are constantly bickering, the tour guide Gabato (Guzman) is overly emasculated and his daughter Kailani (Hudgens) surly.

The 3D, the CGI of the island and the sets are perhaps main draw of the movie. We see elephants as big as cats and bees as big as cars. The effects are mostly impressive all around but it never manages to find the right pace or impact because it just comes in one after another without the dramatic tension. It’s hard to care about the perils or be in awe at what’s shown when the characters are so thin.

After watching the movie, I get this feeling that the Rock had way too much creative input in the movie. His absurd peck joke from the trailer aside, his character is a prize-winning Navy cryptographer who also knows structural engineering and who can also play a mean ukulele and really hold down a tune (although awful singing truth be told); This all hints at the big guy pretending to be smart and sensitive. Combine this with the almost palpable resentment between him and Caine and the sickening obsequiousness of Guzman towards him, it just feels uncomfortable.

While the movie is impressive as a 3D CGI set piece, it is severely let down by the characters. A lot of kids/family movies lately have this undertone of spoiled rich American kid gets everything he wants but this movie does this in a very ugly way. Kids will overlook all these flaws in the movie and be mesmerized by the 3D and special effects but I think adults would find it a bit pointless and uncomfortable. Empty entertainment for kids is my view of this movie.