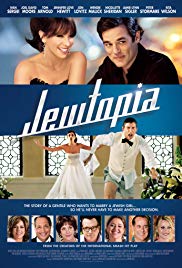 Storyline:
Two childhood friends reunite as adults to help each other land the women of their dreams. Chris wants to marry Allison, a Jewish girl, so that he’ll never have to make another decision for as long as he lives. Adam is on the verge of getting married to Hannah, a woman he is not content with. When Chris enlists Adam’s help in pretending to be Jewish so that Allison will date him, cultures collide and chaos ensues!
Written by
Dennis
User Reviews: I’ve contemplated whether to give it a 5 or a 6. I left the theater with a smile, and actually had a good time watching it. I had smiled, laughed at times, and at one point even grabbed my belly. So I’ll give it a six.

On the bad side, it is very dumb and there is lots of toilet humor. One problem is that most of the jokes are very dumb and are not funny enough to compensate for the lack of wit.

On the good side, it is not rude at all, even with all the amount of sex jokes, clitoris jokes, and toilet jokes. Even when the jokes didn’t make me laugh too much, they weren’t offensive and I didn’t have any inconvenience watching. There are also nice stereotypes about Jews. Exaggerated of course, but taken from the reality.