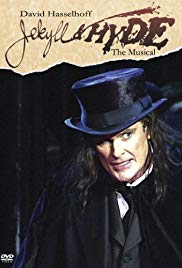 Storyline:
Musical version of the Robert Louis Stevenson story about a doctor who conducts an experiment on himself that results in his bringing out the dark, murderous side of his inner self, “Mr. Hyde”.
User Reviews: Since I was christened into the beauty of Jekyll and Hyde the Musical by Anthony Warlow’s sterling performance, I sat down to watch this version with exactly the right attitude. I was drawn to watch it by the pure horror that the thought of David Hasselhoff butchering my favourite musical instilled. I had to see it, because potentially I would laugh harder than I ever had in my life. So suitably, I was there with a friend, some cheap chocolate liqueur, and a projection monitor turning the lounge room wall into the stage.

Some of the casting annoyed me. I guess I’m something of a purist when it comes to period theater, but John being black seems culturally improbable, and the inevitable deepness and timbre to George Merritt’s voice made him dominate over Hassellhoff, which turns the character into more of a mentor figure than a friend and equal.

Andrea Rivette’s singing in what looked like the world’s second tightest corset was amazing to behold, but the depth in her acting was lacking.

Small lyrical changes to a lot of the songs seemed made in an effort to dumb the plot and themes down to make it nice and sachharin, and that reeks of censorship, which I abhor in any form.

What made it for me is exactly what drew me, like a train wreck, to watch.

David Hasselhoff is not a born singer, nor is he likely to become a seasoned veteran of Broadway musical, but I was shocked silent by the intensity of his rendition of the confrontation. It wasn’t mind-blowing, but it was a guy who used to drive a talking car doing it, which made it all the more impressive. The makeup and lighting effect used for the sequence was also nicely effective.

Ultimately, I feel I got a solid (if B grade) performance all round. Hasselhoff, I imagine, has fulfilled a lifelong dream, and I raise my glass to him for doing it.