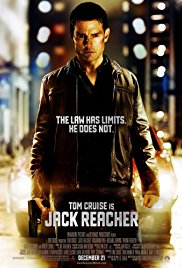 Storyline:
In an innocent heartland city, five are shot dead by an expert sniper. The police quickly identify and arrest the culprit, and build a slam-dunk case. But instead of confessing, the accused man writes the words, “Get Jack Reacher.” Reacher himself sees the news report and turns up in the city. The defense is immensely relieved, but Reacher has come to bury the guy. Shocked at the accused’s request, Reacher sets out to confirm for himself the absolute certainty of the man’s guilt, but comes up with more than he bargained for.
Written by
Anonymous
User Reviews: Saw JACK REACHER on Monday night at an advance screening. Here’s some of my thoughts. There are no spoilers.

First off, I’d say I agree with the general critical reception: 4/5 stars. To me that means it’s a solid movie that delivers at the high end of its genre. JACK REACHER isn’t trying to be anything revolutionary, it’s more the kind of action thriller audiences haven’t seen for a while.

This isn’t MISSION: IMPOSSIBLE or even James Bond. Writer/director Christopher McQuarrie takes his inspiration from action movies of the late 60s/early 70s like DIRTY HARRY (which has been name checked in a couple reviews already), BULLITT (for the car chase); and maybe another Don Siegel movie, CHARLEY VARRICK. The excitement here doesn’t come from over the top stunts or huge explosions. Like the action movies just referenced, you thrill to watching a strongly defined protagonist outsmart, outfight and outmaneuver the bad guys.

Which brings me to the character of Jack Reacher and the casting of Tom Cruise. In the series of novels by Lee Child this movie is based on, Jack Reacher is an ex-MP detective. After a lifetime spent on military bases overseas, he lives as a drifter in the United States who adheres to a life of zero commitments: No house, no job, no car, no possessions, no family. Oh, and he stands 6’5" and weighs 250 lbs.

Clearly Tom Cruise doesn’t match that physical description. What makes Reacher such a great character in Child’s books though has far less to do with his exterior than it does with his intellect. If you’ve read the series as I have, it’s a little strange at first. As the film played out however, I got more relaxed and more into it. This was definitely a movie about Lee Child’s hero Jack Reacher, physical differences be damned.

Would I have preferred an unknown actor closer to Child’s description to play Reacher on screen? Yes, of course. But I could say that about virtually any character, and often do. I generally want unknowns for everything.

Which is where Cruise’s casting comes in handy a bit. Because his casting sort of guarantees a certain amount of box office, it means the filmmakers can take more chances. Like crafting an action movie that’s longer on character and occasional brutal violence and short on mindless action and impossible nonsense.

JACK REACHER was a very satisfying action thriller for me. I felt it captured what I love about Lee Child’s thrillers and Jack Reacher in particular. I’d definitely recommend it, and I’m going to see it in the theater again. That’s for damn sure.