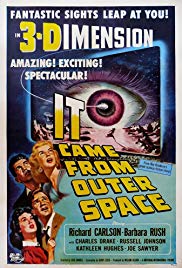 Storyline:
John Putnam is a writer and an amateur stargazer with a new home out in the beautiful Arizona desert, which he enjoys with Ellen Fields, his girlfriend and a local schoolteacher. John is not trusted by the people of the small town near where he lives, certainly not by Sheriff Matt Warren, who feels protective of Ellen, and perhaps something more. One night, John and Ellen see a meteorite crash in the desert. John drags his friend, Pete, out of bed to take him over to the crash site in his helicopter. Once there, John climbs down into the crater. Unfortunately, he does so alone, as Pete and Ellen wait for him. John is the only one who sees the spaceship before a landslide covers it. And John is the only one who catches a glimpse of the hideous thing inside. At first John’s story seems mad, until some of the townsfolk begin acting strange – as if they aren’t really who they seem to be.
Written by
J. Spurlin
User Reviews: This is director Jack Arnold’s first science-fiction effort and one of the earliest to use a desert setting. Richard Carlson is very believable as an astronomer who, along with his fiancee, witnesses a meteor crash-landing that turns out to be a spacecraft. No one in the small town believes him until they start disappearing. Arnold uses theremin music to great effect, the photography is eerie, dialog (by Ray Bradbury) poetic, and the alien a terrifying large crawling mass with one bulging eye that leaves a snail-like trail in its path. The aliens are not bent on destruction – an interesting precursor to Steven Spielberg’s expensive "Close Encounters of the Third Kind" (1977)- even its main titles are at the End. This is low-key, intelligent, satisfying drama. Co-starring are Barbara Rush (she’s a babe), Russell Johnson (likewise), Charles Drake, Joe Sawyer, Kathleen Hughes (who’s tantalizing in a cameo).

Storyline:In 1910, a wayward mother re-visits the family she deserted.User Reviews:

Timerider: The Adventure of Lyle Swann (1982)

Storyline:Lyle Swann is a successful off-road racer who mistakenly gets sent back in time 100 years. When a band of outlaws robs Swann of his motorcycle, he's forced to outfox the gangsters and give in to the seductio...