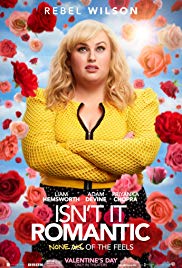 Storyline:
A young woman disenchanted with love mysteriously finds herself trapped inside a romantic comedy.
User Reviews: I was a big fan of director Todd Strauss-Schulman’s Final Girls, a comedy about a group of people sucked into the world of a horror movie. (If you haven’t seen it, I highly recommend it.) So when I heard he was doing a similar movie, in which Rebel Wilson’s character hates romantic comedies and finds herself in one after hitting her head, I was very curious. Unfortunately, the director couldn’t strike twice. Though it has its moments, I found Isn’t it Romantic to be an underwhelming experience.

The film does have it’s funny, including some good-natured jabs at the romantic comedy genre, or heartfelt parts. The director and others were definitely trying. However, as a whole the thing doesn’t come quite together. It feels like the script could have gone through another revision. The jokes and story just feel a little low-energy. This is one of those movies where it’s especially sad because it feels like it comes close to a truly good film, but just misses the mark.

Pacing is a concern. The setup goes on too long, Rebel’s character trying to wrap her head around the world takes too long, and guess how short or long the ending was?

Rebel’s Wilson’s performance is lacking. She excels at outrageous/outgoing comedy. However, here she plays more of a straight lead. It’s the same issue I think she had with her short-lived television show, she doesn’t quite know how to play it straight and is a little wooden. In fairness, direction may have had a hand in this. Adam Devine and Liam Hemsworth are the romantic interests, and though usually fun guys, they aren’t quite as entertaining as usual.

On the other hand, Brandon Scott James does a great job as the movie world’s dated stereotypical gay best friend. Glow’s Betty Gilpin isn’t in this much but she does pretty good double duty as Rebel’s best friend in the real world and a completely different character in the movie world that I won’t spoil. Her change in performance and appearance is so strong that it took me a minute to recognize her.

Like I said, the director was trying and it definitely shows in the appearance of this film. This is is a romanticized borderline perfect world and it shows. Super colorful; the lighting kind of look like it belongs to 80’s on-location TV shows. A lot of detail; extras are constantly seeing doing little things in the background. There are a couple of decent musical numbers, too.

Now when I said this didn’t work for me, I admit I may be biased. I’m not a big romantic comedy person. I think that Love Actually is one of the best romantic comedies because of the coldly rational reason that the shorter divided story-lines deletes the risk of drawing things out and boredom. Still, I do think there are much better romantic comedies than this.

Storyline:Lucas travels to visit his sister who lives in Niebla, a remote town in southern Chile. Beside the ocean shrouded in the wintry mist, he meets Antonio who works as a boatswain in a local fishing boat. An int...