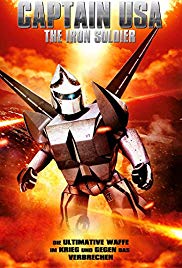 Storyline:
A robot created by the military falls into the hands of a group of mercenaries. It’s up to the son of the man who created the robot to stop the mercenaries before they sell the robot to a foreign power.
User Reviews: that this movie is titled "Captain USA – The Iron Soldier" here in Germany. Everyone who paid attention to this piece of c**p (and I pity every soul who witnessed Iron Soldier) should have noticed that its plot is, in fact, set in Canada. One "important" guy even wears a uniform with "Canada" on it and you clearly can recognize the Canadian flag near the end of the movie.

Wait? That’s a review? Yes it is! This text started as a comment but I quickly realized that this little anecdote sums up the overall quality of the movie very well. If you have friends who consider Uwe Boll the worst director ever, you should introduce them to His Infernal Majesty of Bad Filmmaking: Brett Kelly (the guy who made Rise of the Black Bat would be a candidate worthy of mention, too).

Seriously: This movie isn’t full of plot holes, its plot is one gigantic hole and I’m still searching for the edge. Bad acting. Bad writing. Bad directing. You there, reading this review! Imagine if we team up and try to make a movie with a few friends who are interested in participating in it. We don’t really have a script, we just shoot it. Guess what? It would be award-worthy compared to Iron Soldier (unless you are as artistically skilled as Ashton Kutcher).