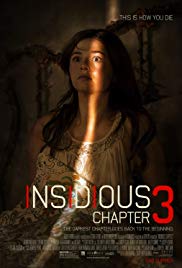 Storyline:
After trying to connect with her dead mother, teenager Quinn Brenner, asks psychic Elise Rainier to help her, she refuses due to negotiate events in her childhood. Quinn starts noticing paranormal events happen in her house. After a vicious attack from a demon her father goes back and begs Elise Rainier to use her abilities to contact the other side in hope to stop these attacks by this furious demon content for a body.
Written by
ahmetkozan
User Reviews: I am going to be completely honest with you guys, I have never seen Insidious or its sequel. I saw this film today because i needed to pass some time and i couldn’t be bothered to wait an extra half an hour to see San Andreas. I’ve heard that the others in the series are good films but i am not a huge fan of modern horror and prefer the 70s/80s vibe that we got with It Follows. Insidious Chapter 3 doesn’t have that vibe, but it is still a lot better than most modern horror today and i found enjoyment out of it. I was also pleased that this film was a prequel because i had no trouble following the plot.

Going straight into it, the film follows a young girl called Quinn who is trying to reconnect to her deceased mother and visits a retired psychic. The encounter however leaves her with something else, instead of her mother trying to contact her like she first thought, something much more sinister approaches her and with the help from her father, the psychic and for some reason a couple of ghost hunters from the internet (really?!) They try to rid the evil from her. It sounds pretty basic and for the most part it is, but when it all wraps up the story between Quinn and her mother is surprisingly sentimental for a horror film and leaves quite an impact afterwards which is something i don’t experience much with horror. This is a concept that an earlier horror film this year, The Woman In Black: Angel of Death, had the potential to do but ultimately failed. The way it is executed here is much better and that was really nice to see because it could have easily been another crappy modern horror prequel like Annabelle.

As for the horror itself? I can safely say it is one of the scariest horrors I’ve seen for a while. Like i mentioned, i’m not sure how scary the others are but this one will have anyone feeling unsettled at points and even made me jump out of my seat a few times, which was good because jump scares rarely have that effect on me. I think it worked with Insidious Chapter 3 because of the tense feel throughout and the fact that it doesn’t throw one at you every couple of minutes that go by. It took a little bit of time for the movie to actually become interesting, but when it did it was enough to keep me entertained for the duration, which was all i wanted to be honest. I don’t know any of the cast members from anything prior to this, but they were pretty 50/50 to me. The actresses who play Quinn and the psychic were very good whereas the father and the two ghost hunters were kinda awkward to watch. Was that enough to make this a bad movie? No, because it was not one.

all-in-all Insidious chapter 3 is an entertaining and tense film which is the right blend of jump scares and atmosphere, still not my favourite horror of the year (that goes to It Follows) but i enjoyed it more than Unfriended and The Woman in Black and liked the emotional twist it gave us. My biggest complaint is the cop-out ending. I don’t know why horror films these days insist on having an ending where a mysterious figure pops up at you and screams because it doesn’t look good it feels tacky and takes the atmosphere away from the film which is the number one complaint i have for Unfriended. But it didn’t completely ruin the film for me and i think if i had seen the others i would understand what was happening so maybe i don’t like it here for that reason. It kept me intrigued and made me want to watch the previous two, which is perfect being a prequel and all, so that is just what i will do.

Storyline:White rage is the story of Lauri, and through him the story of other victims of both school bullying and a separate childhood trauma: victims full of white rage, which may lead to school shootings and other ...

Storyline:Lily wants to be an activities director at this Lodge she works at and she is thrilled when she's given the chance to do so by helping Noah and his family, who are there for his sister's wedding.User Reviews...

Storyline:Anthony Burgess created the primitive language for the early humans in this prehistoric adventure about a trio of warriors who travel the savanna, encountering sabre-toothed tigers, mammoths and cannibalisti...

Storyline:A travel writer is surprised to be sent back to the home town she left, heartbroken, years before. She meets a new man, and also her ex.User Reviews: I love supporting Canadian films, but I found the acting ...

Storyline:A down-on-his-luck stock broker becomes homeless and takes refuge in front of an office building where a famous print model works. After he heroically rescues her from a robbery attempt one night, she takes ...