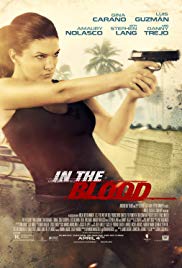 Storyline:
When her husband goes missing during their Caribbean vacation, a woman sets off on her own to take down the men she thinks are responsible.
User Reviews: Despite not really having been taken by Gina Carano’s previous film, I decided to give this one a try as I thought that maybe a simpler and more stripped down film may suit her better she is essentially a b- movie star in the making, so I was interested to see her let loose in a much more genre vehicle where the film would have no interest but to play to her strengths. Any doubts that I may have had that the film would not be a b-movie were dispelled pretty quickly as the film wheeled out the plot with no real effort to fill in backstory beyond one flashback sequences then lots of clunking dialogue to inform us the husband is from a wealthy family and other bits of information. So far so good (in a twisted way) as I assumed we were just clearing stuff out of the way to make more room for tension and action.

Unfortunately this is the tone for the whole film clunkiness. The plot sees her husband go missing and, with no help from authorities and far from home, Carano has to take matters into her own hands. This she does and the end result is perhaps a few good fight scenes but generally the film lacks tension and (ironically) real impact. I was bored for too much of the film and when the action did splutter into life, it seemed determined not to build any drama and instead left it to the tough presence of the lead to do the heavy lifting. She does this to a point but she needed help that never came and it is a shame to see that she still really hasn’t had the chance to turn herself into the female star for the audience that still turns out for Van Damme etc films.

The location and the nature of the film looks a bit too low-rent and this isn’t helped by how detached I was from the action. Beyond Carano the cast are an odd mix of so-so turns from people you don’t know, but bored ones from people you do. Gigandet seems uneasy with his damsel in distress role and doesn’t know who he is. Trejo, Williams and Guzmán feel like they were cast for their names and faces and in return get a bit of a holiday shooting in a nice climate. Nolasco is a decent villain but not made the most of.

If you are in an undemanding mood then maybe this film has enough to distract you for a while, but personally I found it disappointing. The running time plods by and a plot that should be fuelled by desperation and violence is really slowed down too much and action sequences can of "happen" rather than being the result of a strong build up and delivery. Carano is physically impressive and is a decent presence if you don’t ask too much from her I’m still hoping someone can make better use of her than they have so far.