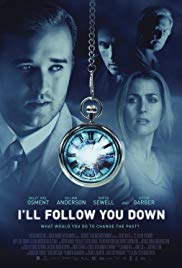 Storyline:
After her genius husband disappears from a routine business trip without a trace the next 12 years becomes so much to bear… But when her son comes of age and is wooed by MIT, his ability to unlock the mystery of quantum physics begins to unravel the mystery of time.
Written by
Lorne Mogk
User Reviews: "I’ll Follow You Down" is that wonderful, inexpensive film you hope to see now and then which surprises the viewer with an explosion of talent from both sides of the camera. I am not going to go into the plot at all except to say that it involves the strong emotional relationships and motivations of people propelled into an off-center drama inspired by a science fiction story element.

The writer/director is Richie Mehta, who shows tremendous depth and common sense in his plotting and his characters’ dialog, as well as in his non-gimmicky, straight-forward choice of how to use his camera to let the actors shine as they carry the story through to the last frame. I send kudos to Gillian Anderson, Rufus Sewell and Victor Garber for their "generosity towards up-and-coming film makers," in that they supplied wonderfully tuned supporting performances for what was likely very little income. Haley Joel Osment, who was a terrific child actor ("The Sixth Sense" and "A.I.") gives a rock-steady performance here as a multi-layered adult in his young twenties. If he gets the right future film choices, directed by people who correctly make use of his talent, he could become an A-List adult actor by his early thirties. In the meantime, try to catch this little gem of a movie whenever it is available as a theatrical, DVD and/or cable release.