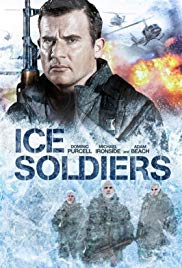 Storyline:
A scientist discovers the bodies of three frozen genetically modified Russians buried in the Canadian North. Upon thawing them out he realizes he has unleashed a deadly threat to Western society and must stop them at all costs.
User Reviews: During the Cuban missile crisis a plane crashes in the Canadian arctic. Folks from a nearby station arrive and rescue 3 survivors. They are all blonde and tall. The physician there is a girl and she’s attracted to the sole conscious survivor. Next, he breaks free and kills everything in sight.

50 years later an oil expedition arrive to the area. Part of it is a scientist named Malraux and his Russian sidekick. In charge of the oil exploration is some mean lady called Frazier. Some paramilitary team lead by Col. Trump is also involved and they mostly join Malraux, whose goal is to find the 3 guys from the intro. They could be the result of a Nazi experiment or just Russian soldiers trying to take over NY. He and the paramilitary team set up camp near a mountain. When bad weather threatens to end the operation, Malraux explores a cave and finds the three bodies. They are transported to the station and put on life support. Then their hearth start beating again. When Malraux tries to kill these guys, he’s placed in custody. Then the guys wake up and ravage the camp.

Malraux survives with an injured leg and starts limping after the three guys. He runs into an Indian who offers to take him to the next town. On the way they stop at a camp where the three guys have just killed everyone. Malraux and the Indian manage to survive and make it to the town where the Russians are enjoying drinks and strippers. That’s when Maulraux confronts the guys and we learn some secrets.

Ice Soldiers starts out pretty well. The part at the exploration camp is pretty good. Things start going downhill when Malraux goes ofter those guys. Direction is pretty good. Acting is also good. Purcell, Ironside, Beach, Branzea, Sullivan are all solid. The problem is with the dialogue of the script. Very little is said and when something is said it’s either confrontational, or unclear. The overall story has some interesting ideas. But it gives up these ideas or doesn’t explore them to turn into an ordinary chase/action movie. Several things that happen are completely unbelievable and should have been handled better. Had this movie stayed at the camp for the entire length of it, it would have turned out better. Still, it’s different and enjoyable.

Storyline:After 20 years of marriage, Maria decides to leave. She moves to the room 212 of the hotel opposite her marital home. From there, Maria can scrutinize her apartment, her husband, her wedding. She wonders if ...