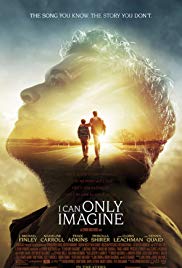 Storyline:
10-year-old Bart Millard lives with his mother and abusive father Arthur in Texas. One day his mother drops him off at a Christian camp where he meets Shannon. Upon his return from camp, Bart finds his mother has left and movers are removing her belongings. He angrily confronts his father, who denies that his abusiveness was the reason she left. Years later, in high school, Bart and Shannon are dating. Bart plays football to please his father, but is injured, breaking both ankles and ending his career. The only elective with openings is music class, so he reluctantly signs up..
User Reviews: I have listened to the song I Can Only Imagine probably thousands of times and after watching this it gave me a new understanding of forgiveness. I am going to be honest here and say I was in tears throughout this movie. This is definitely a must see and bring a tissue or two.

Storyline:Jack and Melissa are frightened by their son's bizarre and violent behavior; they soon learn that he is the gateway to the Apocalypse, and it will happen on his birthday, 11-11-11.User Reviews: The Asylum's ...

Storyline:Well-respected psychiatrist Dr. Jack Mickler is only 10 days away from his retirement. A week before he is due to leave, he encounters a young man who attempts suicide--would be a pretty straightforward case...

Storyline:Vienna has built a saloon outside of town, and she hopes to build her own town once the railroad is put through, but the townsfolk want her gone. When four men hold up a stagecoach and kill a man the town of...

Storyline:English literature teacher Maggie Webber accidentally sees her husband, lawyer Tom Webber, kiss Brigitte. When she confronts him, he says to love another, after 25 years of happy marriage, with a daughter in...