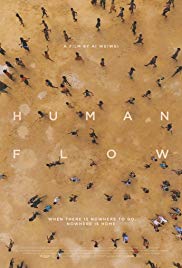 Storyline:
Over 65 million people around the world have been forced from their homes to escape famine, climate change and war in the greatest human displacement since World War II. Human Flow, an epic film journey led by the internationally renowned artist Ai Weiwei, gives a powerful visual expression to this massive human migration. The documentary elucidates both the staggering scale of the refugee crisis and its profoundly personal human impact. Captured over the course of an eventful year in 23 countries, the film follows a chain of urgent human stories that stretches across the globe in countries including Afghanistan, Bangladesh, France, Greece, Germany, Iraq, Israel, Italy, Kenya, Mexico, and Turkey. Human Flow is a witness to its subjects and their desperate search for safety, shelter and justice: from teeming refugee camps to perilous ocean crossings to barbed-wire borders; from dislocation and disillusionment to courage, endurance and adaptation; from the haunting lure of lives left …
User Reviews: I saw this today after having heard Ai Weiwei speak a few weeks ago at the Cooper Union about this film and his NYC project of fence sculptures around the city.

The film documents the plight of global displacement of humans due to unprecedented civil strife and climate disaster – displacing more people than WW2.

It was a bit long but, in fact, that was probably a strategy to mirror the enormity of the problem.

Not moralising, more show than tell, I respect this method of documentary making.

Storyline:The Emergency Code for a plane hijacking is 7500: a tense, intense thriller, told from the cockpit. A flight from Berlin to Paris. Everyday routine in the cockpit of an Airbus A319. Co-pilot Tobias Ellis is ...

Storyline:Pettson promised Findus they would have the best christmas ever this year, but then everything goes wrong. Findus is afraid that Christmas is going to be cancelled at all. So he tries to get help on his own....