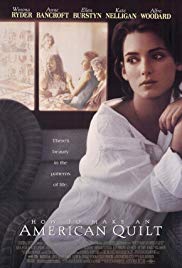 Storyline:
Finn is a young graduate student, finishing a master’s thesis, and preparing for marriage to her fiance Sam. But thoughts of the end of the free life, and a potential summer fling, intrude. She goes home to her grandmother, where, over the making of her wedding gift by a group of quilting-bee friends, laughter, bickering, love, and advice lead her toward a more open-eyed examination of her course.
Written by
Bruce Cameron <[email protected]>
User Reviews: This adaptation by screenwriter Jane Anderson (novel by Whitney Otto) presents us with a character named Finn Dodd (Ryder), a 26-year old college student who has just gotten engaged to her long-time sweetheart Sam (Mulroney). She begins to realize the many changes that will come about because of her acceptance to his proposal and needs time to think and adjust. She decides to spend three months at her grandma Hy’s house in Grasse, CA, which is the center of operations to a longtime quilting bee. During her tenure, she continues working on her master’s thesis (a project of which she continuously changes her topic), all the while listening to the quilting bee’s romantic horror stories as they craft Finn’s wedding quilt.

To sum it up, `How To Make An American Quilt’ is the quintessential chick flick awash with many familiar faces including Maya Angelou. The Pulitzer Prize-winning poet stars as Anna, the queen of an eight-member sewing circle consisting of Glady Jo Cleary (Anne Bancroft), Hy Cleary (Ellen Burstyn), her daughter Marianna (Alfre Woodard), Em Reed (Jean Simmons), Constance Saunders (Kate Nelligan) and Sophia Darling (Lois Smith). Anna winds up in the Cleary household at 16 – pregnant, unmarried and helpless. She will dwell there until the birth of her child, meeting Hy and Glady Jo for the first time. Little does she know that these two young women will remain in her life for years afterward, their interest and skill in the art of quilting mounting over the years by Anna’s guidance.

There is also the story of Hy and Glady Jo themselves and their unspoken bitterness towards each other – we learn that Hy is the reason for Glady Jo’s `self-expression’ all over the walls of the laundry room. Then there is Sophia, an aspiring diver in her adolescence and later an abandoned mother of three; Em, wife to a histrionic artist, suffering his recurrent infidelity; Constance, a decent woman who endures the loss of her nearest and dearest, left with only her precious memories and Marianna, a lover of many but starved for the discovery of her soulmate.

We find as the film goes on that many instances of infidelity exist in the characters’ cluttered histories. Half the women in this movie commit adultery at some point and even Finn falls victim to temptation. Where as once I could not relate, I find myself agreeing with many of Finn’s thoughts and opinions on marriage upon becoming engaged – this includes a question in the very beginning that Ryder’s voiceover poses to the audience: `How do you merge into this thing called ‘a couple’, and still keep a little room for yourself? How do we even know we’re only supposed to be with one person for the rest of our lives?’ These kinds of questions number in the hundreds of intended couples as they come closer to walking the proverbial aisle. I know that I have had my own reservations about marriage ever since I got engaged and many of my questions will never have an answer – I must trust my heart.and my gut.

Performances range in the areas of premium to mediocre. Who comes at the top of my list are screen veterans (and Academy Award winners, natch) Ellen Burstyn and Anne Bancroft. These two never cease to amaze me with how they can turn a character inside out and make it their own. Winona Ryder is so-so (as she is in most of her movies) as Finn but she does manage to touch a few nerves with her dark and luminous eyes – those pretty peepers are half of her dramatic capacity. Alfre Woodard is excellent, giving Marianna a carved edge but a soft core. Kate Nelligan is also wonderful but if you really wanna see her flex those acting chops, take a deep breath of Lila Wingo in `The Prince of Tides’. Dermot Mulroney always seems to play a nice guy that gets taken for granted (The Thing Called Love, My Best Friend’s Wedding, Point Of No Return, etc.) and he does it again here – actis repeatus, you might say. Jean Simmons is a little disappointing as Em, the once beautiful and poised actress now only a shadow of herself. Maya Angelou does fine as Anna and some of Gen X’s more popular faces make brief appearances in supporting roles (Claire Danes, Samantha Mathis, Jared Leto and Jonathan Schaech).

This film is a fairly even script-to-screen production and will please many that seek a decent character study. Of course, you can’t outdo a detailed and poetic novel or the insightful author who writes it. As long as novelists continue to exist and evolve, filmic adaptations cannot compare (though there are a few exceptions here and there, e.g. Dolores Claiborne). This is not to say that `How To Make An American Quilt’ isn’t enjoyable – it’s just not on par with what can be translated through literature. For those who have read Otto’s novel, it will earn your rigid criticism.