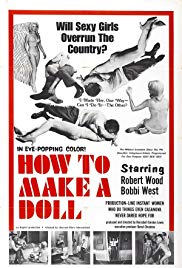 Storyline:
A nerdy professor who has no luck with women builds beautiful female robots to satisfy his sexual desires.
User Reviews: How to Make a Doll (1968)

A nerdy professor (Robert Wood) knows absolutely nothing about women, love, sex or anything that deals with the opposite sex. He goes to see another scientist who just happens to have created a machine that can make beautiful women.

Herschell Gordon Lewis’ HOW TO MAKE A DOLL is a pretty boring film that’s not going to appeal to too many people. The director will always be best known for his Blood Trilogy but he also made a great number of children’s movies as well as softcore sex pictures. This one here seems like a mix between the two but those who enjoy the director’s sex pictures will be disappointed that there’s not even a hint of nudity here.

I’ll be honest and admit that I’m really not sure who this film was aimed at. As a comedy there were a few funny bits but certainly not enough to fill up the 81 minute running time. After a while the nerdy scientist becomes rather boring as does the film. Even when the beautiful women show up there’s just nothing overly thrilling seeing them in bathing suits. Again, I’m sure someone paid to watch this back in the day but it’s pretty boring today.

Storyline:When an army scout retires to a farm in New Mexico he takes pity on a white woman and her half-breed son recently rescued from indians, and invites them to join him. He does this even knowing the child's fat...