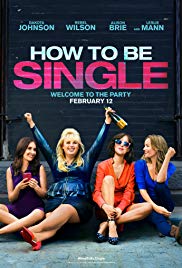 Storyline:
There’s a right way to be single, a wrong way to be single, and then…there’s Alice. And Robin. Lucy. Meg. Tom. David. New York City is full of lonely hearts seeking the right match, be it a love connection, a hook-up, or something in the middle. And somewhere between the teasing texts and one-night stands, what these unmarrieds all have in common is the need to learn how to be single in a world filled with ever-evolving definitions of love. Sleeping around in the city that never sleeps was never so much fun.
User Reviews: Wow, this movie was boring. ‘How to be Single’ doesn’t need nor deserves another introduction. The movie is directed by Chrsitian Ditter (Love, Rosie) and stars Dakota Johnson, Rebel Wilson, Leslie Mann and Alison Brie as four single women living in New York City, trying to find out if they want to be single or not.

We, as the human race, have barely recovered from ‘Fifty Shades of Grey’ and Dakota Johnson throws another atrocity in our faces. It isn’t as bad as this inexplicable hype was, but still, how and why, really why did this movie get made? The movie has no content, no relevant message, tried and failed at being heartfelt, and wasn’t even funny. There’s not much worse than a comedy, trying to be a drama as well, without any good jokes. It’s plain boring. Granted, not all the characters were two-dimensional, but we never got to care about them. They’re just random people, living their random uninteresting lives. The addition of Rebel Wilson was supposed to bring some comic relief but that didn’t work out at all. I haven’t heard a single original, smart joke the entire movie. In fact, at least four jokes or funny situation used in this movie were firstly used in the sitcom ‘How I Met Your Mother’.

The movie follows the four lives of four different women. Leslie Mann is Dakota Johnson’s older sister, Rebel Wilson is a colleague of the latter and Alison Brie is What on earth was her role in this movie? Her character felt irrelevant to the story, as if it her scenes were added later on in the production process. Dakota Johnson’s character is the main character and the movie focuses on her in particular. Johnson did a fine job, but her character arch was so uninteresting and made the entire movie seem pointless.

There’s not much you can get out of this movie. No jokes, the jokes they had were already used in a sitcom, uninteresting characters, pointless storyline, a completely irrelevant character, and the list can go on and on. As a result, ‘How to be Single’ is a boring movie that feels way longer than the 1h 50 min it is.