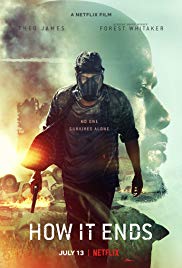 Storyline:
A desperate man tries to return home to his pregnant fiancée after a mysterious apocalyptic event turns everything to chaos.
User Reviews: I was hesitant going into How It Ends because I can’t stand Theo James, there is something deeply obnoxious about him that immediatly puts me off a film.

However truth be told he wasn’t the problem here, in fact his performance was far better than I expected it to be. Standing side by side with veteran Forest Whitaker this thriller wasn’t what I expected at all.

It tells the story of a man who races across the country with his other halfs father during a seemingly apocalyptic event to save her life.

It’s a visual treat, stunning to look at which you certainly don’t expect with a movie of this type. It truly is beautiful despite the grim setting so they’ve accomplished something truly remarkable here.

Though a bit repetitious and laggy as the story progresses it’s the finale that really hobbles the film. Namely, it doesn’t really have one and that’s such an incredible shame as the movie was going so well up until that point. Some may disgaree with me on that, I personally didn’t appreciate it.

Regardless it’s a good effort and very easy on the eyes.

They seem to run out of ideas

Everyone is bad when the poop hits the fan