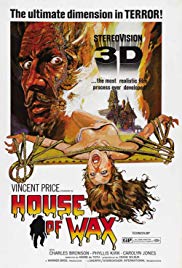 Storyline:
Professor Henry Jarrod is a true artist whose wax sculptures are lifelike. He specializes in historical tableau’s such a Marie Antoinette or Joan of Arc. His business partner, Matthew Burke, needs some of his investment returned to him and pushes Jarrod to have more lurid exposes like a chamber of horrors. When Jarrod refuses, Burke set the place alight destroying all of his beautiful work in the hope of claiming the insurance. Jarrod is believed to have died in the fire but he unexpectedly reappears some 18 months later when he opens a new exhibit. This time, his displays focus on the macabre but he has yet to reproduce his most cherished work, Marie Antoinette. When he meets his new assistant’s beautiful friend, Sue Allen, he knows he’s found the perfect model – only unbeknown to anyone, he has a very particular way of making his wax creations.
Written by
garykmcd
User Reviews: HOUSE OF WAX

Though BWANA DEVIL (1952) was clearly responsible for kickstarting the 3-D boom of the 1950’s, it’s doubtful the fad would have survived for long had it not been for Andre de Toth’s HOUSE OF WAX, ballyhooed by Warner Bros. as: "The BIG 3-D feature you’ve been waiting for!" The studio’s confidence is borne out by the film itself, a sensational – and sensationalized – remake of Michael Curtiz’s MYSTERY OF THE WAX MUSEUM (1933), in which sculptor and wax museum curator Vincent Price is driven insane after being disfigured in a fire set by his greedy business partner (Roy Roberts), eager to reap the benefits of a generous insurance policy. Using a wax mask to conceal his true appearance, Price makes short work of Roberts and reopens his museum in New York, where he steals fresh cadavers and uses them as the human framework for his gruesome exhibits, only to be rumbled by heroine Phyllis Kirk when her recently-murdered friend (Carolyn Jones) turns up as part of the Joan of Arc exhibit…

With its handsome period art direction – the movie is set in 1902 – and no-nonsense screenplay, this was clearly designed as one of Warner’s major attractions for 1953, above and beyond the film’s technical achievements. Today, the storyline may seem a little predictable, even for those unfamiliar with Curtiz’s original, but the narrative unfolds at a rapid clip and contains more than a few hair-raising set-pieces, most notably the opening fire sequence (in which Price looms uncomfortably close to the raging inferno); the discovery of Roberts’ corpse in an elevator shaft; Price’s cloaked villain stealing a corpse from the morgue at midnight and pursuing Kirk through the fog-shrouded streets; and the climactic face-off around a vat of boiling wax. There’s even a chorus of dancing girls (watch out for those legs!), along with a couple of ferocious fight scenes which – literally! – erupt from the screen! Price achieved lasting fame as a consequence of the film’s box office success – he was quickly snared by Columbia for their own 3-D horror feature, THE MAD MAGICIAN (1954), sealing his fate as one of Hollywood’s premier boogeymen – but except for the scenes in which he appears as a malformed ghoul, his performance is too restrained to be entirely effective, and the same could be said of virtually all the principal players. Only Jones (later TV’s Morticia Addams) as Kirk’s giggling, gold-digging best friend and Paul Cavanagh (THE FOUR SKULLS OF JONATHAN DRAKE) as the unwitting patron of Price’s latest venture make much of an impression, while Frank Lovejoy and Dabbs Greer are the hard-working cops whose suspicions lead to the villain’s downfall. However, while the characters may be bland and unremarkable, the film succeeds by virtue of its spectacle, and recent festival screenings (to celebrate 50 years since the first 3-D boom) have been sold out on every occasion, reaffirming its enduring appeal as one of the finest movies of its kind.

Reviewers often claim the film is ‘just as good’ when screened flat, and while there’s no denying the production’s many virtues, the 3-D version is a REVELATION! Using the dual-camera Natural Vision format developed by Milton and Julian Gunzberg (first used in BWANA DEVIL the year before), cinematographers Bert Glennon and J. Peverell Marley use the process to emphasize depth in every sequence, framing each shot to highlight the angles in Stanley Fleischer’s careful set designs. For commercial reasons, de Toth includes a number of crowd-pleasing off-the-screen effects (Reggie Rymal’s infamous paddle-ball is the most fondly-remembered), though the film doesn’t overplay it’s hand in this respect. Contemporary audiences were startled out of their seats during a climactic sequence in which Bronson looms out of the FOREGROUND to attack hero Paul Picerni, one of several passages created specifically with 3-D in mind, and which are rendered completely ineffective and/or pointless in flat versions. Viewing the film minus its dimensional effects is like watching a pan-scan edition of a widescreen movie, in which half the entertainment value has been cruelly revoked.

Warner Bros. also used "House" to inaugurate their short-lived WarnerPhonic Sound system, which added an even greater dimension to proceedings. Multichannel sound wasn’t a new concept at the time (Disney had used the Fantasound process as early as 1940 for FANTASIA, for instance), but it WAS decidedly rare in mass market features (THIS IS CINERAMA introduced a 7-track process in 1952, but Cinerama was a non-starter for regular movie houses). And while most theaters played the movie in standard optical mono, lucky patrons who attended engagements in major metropolitan areas enjoyed "The first phenomenal merger of 3-D action! 3-D color! and 3-D sound!", as per the ads. Sadly, the WarnerPhonic tracks have since been lost, and current multichannel versions feature a remix of the mono elements by Chace Stereo, no more than a fair approximation of the original material.