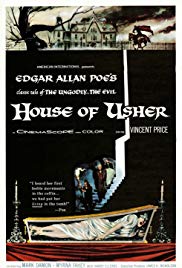 Storyline:
After a long journey, Philip arrives at the Usher mansion seeking his loved one, Madeline. Upon arriving, however, he discovers that Madeline and her brother Roderick Usher have been afflicted with a mysterious malady: Roderick’s senses have become painfully acute, while Madeline has become catatonic. That evening, Roderick tells his guest of an old Usher family curse: any time there has been more than one Usher child, all of the siblings have gone insane and died horrible deaths. As the days wear on, the effects of the curse reach their terrifying climax.
Written by
Jean-Marc Rocher and Nina <[email protected]><[email protected]>
User Reviews: "House of Usher" is an excellent start for Roger Corman’s cycle of films based on the work of Edgar Allan Poe. There have been many remakes, but the Corman films remain the definitive statement. Corman was able to capture the feel of Poe’s work and that’s something that the remakes couldn’t even touch. It also provides a tour de force for Vincent Price and establishes him as a great actor.

The film was shot on a budget of $270,000 and it looks GREAT. "House of Usher" is a fabulous calling card for American International Pictures, the distributor. Mostly known for making grade Z schlock, Corman’s films gave AIP real class. This is also Corman’s first film in CinemaScope and he makes the most of the widescreen here. It earns him a distinction of mine as a "Master of the Widescreen", or filmmakers who create complex and worthwhile compositions in the widescreen frame. The only problem is that the Poe films die on TV, due to the horrific "pan-and-scan" process. Luckily for us, American Movie Classics show these Poe films often in letterbox and MGM is releasing the cycle on letterboxed DVDs.

For a film that runs 85 minutes, "House of Usher" packs a lot into its’ narrative. It is the most faithful of the Poe adaptations, although screenwriter Richard Matheson does take some liberties with the source material, as any great adaptation should. Floyd Crosby’s CinemaScope photography is excellent as usual and Daniel Haller’s elaborate sets make this look more expensive than it really is. Vincent Price’s performance as Usher sets the tone for his future appearances in other Poe films. It neatly combines calm and frenzy together and I can’t think of anyone else who would have done a better job. He should have received an Oscar nomination and maybe even the Oscar itself.

Note: "House of Usher" introduces the infamous "Burning Rafters" sequence. If you watch these Poe films back-to-back, you’ll see this same sequence repeat itself over and over in several of the films (Tomb of Ligeia and The Raven come to mind). It is a mild criticism, but it is such a great sequence and it is so effectively shot that I didn’t mind seeing it again and again.