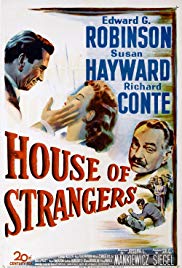 Storyline:
In New York, after seven years in prison, the lawyer Max Monetti goes to the bank of his brothers Joe, Tony and Pietro Monetti and promises revenge to them. Then he visits his lover Irene Bennett that asks him to forget the past and start a new life. Max recalls the early 30s, when he is the favorite son of his father Gino Monetti, who has a bank in the East Side. Gino is a tyrannical and egocentric self-made man that raises his family in an environment of hatred and Max is a competent lawyer engaged with Maria Domenico. When Max meets the confident Irene, he has a troubled love affair with her. In 1933, with the new Banking Act reaches Gino for misapplication of funds. Max plots a plan to help his father but is betrayed by his brothers. Now Max will see his brothers that have also being raised under the motto “Never Forgive, Never Forget”.
Written by
Claudio Carvalho, Rio de Janeiro, Brazil
User Reviews: House of Strangers is directed by Joseph L. Mankiewicz and adapted to screenplay by Phillip Yordan from Jerome Weidman’s novel I’ll Never Go There Any More. It stars Edward G. Robinson, Susan Hayward, Richard Conte, Luther Adler, Paul Valentine and Efrem Zimbalist. Plot finds Robinson as Gino Monetti, an Italian American banker who whilst building up the family business has ostracised three of his four sons. When things go belly up for Gino and the bank, the three sons turn against their father, the other, Max (Conte), stays loyal but finds himself set up for a prison stretch. Untimely since he’s started to fall in love with tough cookie Irene Bennett (Hayward).

Jerome Weidman’s novel has proved to be a popular source for film adaptation, after this 20th Century Fox produced picture came the Western version with Broken Lance in 1954 (Yordan again adapting), and then Circus set for The Big Show in 1961. While its influence can be felt in many other, more notable, crime dramas along the way. The divided clan narrative provides good basis for drama and lets the better actors shine on the screen with such material. Such is the case with House of Strangers, which while hardly shaking the roots of film noir technically, does thematically play out as an engrossing, character rich, melodrama.

Propelled by a revenge core peppered with hate motives instead of love; and dabbling in moral ethics et al, Mankiewicz spins it out in flashback structure. The primary focus is on Max and Gino, with both given excellent portrayals by Conte and Robinson. Gino is a driven man, very dismissive towards three of his boys (Adler standing out as Joe) who he finds easy to find fault with. But Max is spared the tough love, Gino admires him and sees him very much as an equal, which naturally irks the other brothers something rotten. This all comes to a head for the final quarter where the pace picks up and the tale comes to its prickly, if not completely satisfactory, ending.

In the mix of family strife we have been privy to Max’s burgeoning relationship with Irene (Hayward sassy), which positively simmers with sexual tension, or maybe even frustration? This in spite of the fact he is engaged to be married to the homely innocent Maria (Debra Paget). So with dad Gino proving to be, well, something of an ungrateful bastard, and Max cheating on his intended, clearly this is not a film about good old family values coming to the fore! Then there’s the small matter of brother betrayal and the case of the foolish decision making process, all elements that keep the viewer hooked till the last. 7/10