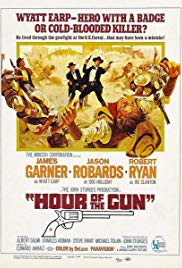 Storyline:
Marshal Wyatt Earp kills a couple of men of the Clanton gang in a fight. In revenge, Clanton’s thugs kill the Marshal’s brother. Thus, Wyatt starts to chase the killers together with his friend Doc Holliday.
User Reviews: Here is yet another Wyatt Earp story. I wasn’t aware of this version until early in the summer of 2005. I thought I had seen them all. Judging by the amount of reviews in here, I wasn’t alone in not knowing about this film. I am glad I got it, but It was just okay; nothing special.

None of the three top characters: James Garner as Earp, Jason Robards as "Doc Holliday" or Robert Ryan as "Ike Clanton" can match up to their best of their counterparts in other Earp films…..but they were still pretty good and certainly three famous actors. The only one who might have been a little out of place was Robards, who played a little too subdued "Doc."

Still, the similarities are there in all the Earp movie versions including this one: the gunfight at the OK Corral, the courtroom trials, the train scene near the end, Holliday’s illness, etc. One thing missing from this is any love interest, which actually was nice to have left out for once.

Storyline:Katina, an impoverished Greek woman, tries to arrange the marrage of her shepherd son, Thanos, to Despina, the daughter of a wealthy landowner. But when Despina's father, Vlahopoulos refuses to give his bles...

Storyline:A woman framed for her husband's murder suspects he is still alive; as she has already been tried for the crime, she can't be re-prosecuted if she finds and kills him.User Reviews: This is a movie that we go...