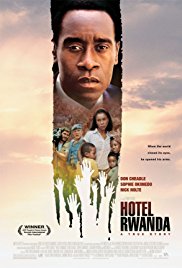 Storyline:
1994. In Rwanda, the classification of the native population into Hutus and Tutsis, arbitrarily done by the colonial Belgians, is now ingrained within Rwandan mentality despite the Rwandan independence. Despite the Belgians having placed the Tutsis in a higher position during the Belgian rule, they have placed the majority Hutus in power after independence. Paul Rusesabagina, a Hutu married to a Tutsi, Tatiana Rusesabagina, is the House Manager of the Hotel Des Milles Collines in Kigali. The Milles Collines, owned by Sabena (the national airline of Belgium), is a four-star hotel catering primarily to wealthy white westerners. Paul, who knows how to work the system to run the hotel effectively for its guests and for Sabena, is proud that most of the Caucasians who he meets in this professional capacity treat him with respect. After a specific incident, the relative calm between the Tutsi guerrillas and government-backed Hutu militia takes a turn. Paul’s thought that the native …
Written by
Huggo
User Reviews: I attended the United States premier of Hotel Rwanda on November 3rd, 2004 in Philadelphia. I have never written a review for a movie before, but this movie was excellent and I am urging everyone I know that they should see it as well.

I lived in Rwanda in the summer of ’04. I have read several books on the history of Rwanda and talked about the ’94 genocide with locals in Rwanda and also with Rwandans living in the US. I am by no means an expert on the history or the country, but I do know a fair amount about it, which is part of why I am writing this review.

The movie was an excellent reproduction of what Rwanda is like and it tells the true story of one of the many heroes during that time. While it is a sad movie, it is also a story of hope. The portrayal of the violence was subtle and powerful, but not overly graphic. The movie focuses on the efforts of the manager of an upscale hotel in Kigali, the capital of Rwanda to protect the guests/refugees streaming into his hotel to escape the killing. The writer/directory (who spoke after the premier) said that he made an effort to get a PG13 rating rather than an R rating to ensure that students would be able to see this movie.

It is an important movie to see because it brings to life the hope and triumph in Rwanda. It also shows what the media did not show in ’94 and is not showing in Darfur: The suffering of ordinary people who need help from the rest of the world. While governments repeat the phrase ‘never again’ yet do nothing, it is up to us to ordinary people to learn about these events and do something or make our governments do something about them. Please see this movie-it does not have the budget to launch everywhere and relies on word of mouth to generate enough interest to make it into every city.

Storyline:Vinnie has been hiding out in his shed since faking his own death. But the gang need his help and try to lure him out of hiding with a new business proposition. Tommo has a chance to buy The Rat and Cutter, ...

Storyline:User Reviews: Being a collection of works from many varied filmmakers gives us a film with many varied styles; most work for me, few do not... short stories often feel like someone just clipped the climax of...