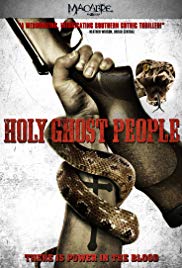 Storyline:
In this psychological thriller, nineteen-year old Charlotte enlists the help of alcoholic ex-Marine Wayne to find her estranged sister who has gone missing deep in the Appalachian Mountains. Their search leads them to the Church of One Accord and an enigmatic snake-handling preacher named Brother Billy, who’s devoted congregation of outcasts knowingly risk injury or death seeking salvation in the Holy Ghost. What Wayne and Charlotte uncover during their time on the mountain – about themselves and the nature of faith – will shake them to their core, as the mystery of Charlotte’s sister and her fate unravels…
Written by
Anonymous
User Reviews: 7 of 10. It’s hard to review this without spoiling it. Let’s just say this is a film best watched knowing as little about it as possible. The title has multiple meanings within the story, thereby adding another element to enjoy.

There are some drawbacks. The beginning is weak and feels pieced together after the rest of the story is told, requiring narration early on to setup the story, but the narration doesn’t help. There are also some annoyingly stupid actions that eventually make sense given the nature of the characters.

The film could be easily titled "Seriously Messed-up Folk", but that applies to a lot of films. Don’t expect high action. It’s drama and mystery made more interesting via the story and the quirky characters involved. Excellent performances by Joe Egender, Don Harvey, and Brendan McCarthy make it authentic and immersing. Yet the story could really use 5 more minutes for things like plot and character development.

Storyline:A series of auditions is taking place in a museum-like living room. Various men improvise or deliver prepared lines, rehearse gestures and slogans, aim guns, and collapse as if mortally wounded. The theme of...

Storyline:For travelers around the world, the eruption of the Icelandic volcano Eyjafjallajökull is a downer. For Alain and Valerie, it's a catastrophe. For if they are to make it in time to the tiny Greek village whe...