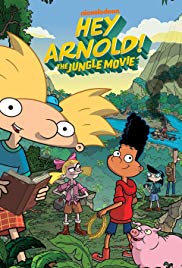 Storyline:
Picking up where Hey Arnold! (1994) left off, this tells the story of what happened to Arnold’s parents.
User Reviews: It brought back memories.
The key aspects of every character were highlighted.
I don’t know what to say, Craig Bartlett you are a genius.
Arnold meant so much growing up.
This movie though unbelievable on few occasions, is a masterpiece.
Should have released in theatres.
The Arnold fans would enjoy every moment of it.
This movie was a closing chapter of the base plot – Arnold’s parents.
But I want more, I want a lot of movies to be released in Hey Arnold series.
I am 28, but I would watch Hey Arnold series when its started again.
I don’t know how to say this, but there were moments when I cried while watching this movie only to see Arnold crying at the same time too.
I don’t cry for movies, not for fictional characters, certainly not for animation but I did.
I wish Hey Arnold series wasn’t stopped because of a dispute with Nickelodeon in the early 2000s.
Hey Arnold is certainly a highlight of television for me as a kid.