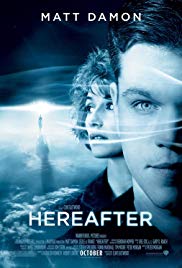 Storyline:
A drama centered on three people who are haunted by mortality in different ways. George (Matt Damon) is a blue-collar American who has a special connection to the afterlife. On the other side of the world, Marie (Cécile de France), a French journalist, has a near-death experience that shakes her reality. And when Marcus (identical twins Frankie McLaren and George McLaren), a London schoolboy, loses the person closest to him, he desperately needs answers. Each on a path in search of the truth, their lives will intersect, forever changed by what they believe might-or must-exist in the hereafter.
Written by
Warner Bros. Pictures
User Reviews: An emotional film (bring some hankies) exploring the love of children for their mother, the loss of a loved one, and the near-death experiences of the two main characters. The acting is superb, particularly the young McLaren brothers and Cecile DeFrance. I applaud Clint Eastwood for taking this risk and creating a solid piece with riveting emotions and a fantastic conclusion. The only leap of faith that must be taken is the belief that George (Matt Damon) truly has this gift/curse since it is the thread that weaves through all his relationships. This is truly an enjoyable movie and adds to my belief that the greatness of a film is not in the critic’s eyes but in your own. This is the second sleeper movie of the week for me. The first one was RED…a great, entertaining movie.