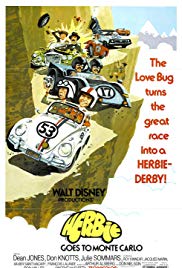 Storyline:
Race car driver, Jim Douglas goes to Monte Carlo to enter his car, Herbie, in the Monte Carlo rally. When they get there, Herbie falls for another driver’s car and Jim falls for the driver Diane, who thinks he’s weird. But what they don’t know is that a pair of thieves who stole a very valuable diamond, hid it in Herbie’s gas tank. And the thieves try to get it back.
Written by
[email protected]
User Reviews: Vincent McEveety took over directing duties on this third "Herbie" film that sees Dean Jones return as Jim Douglas, who has regained possession of Herbie, and has entered a Paris to Monte Carlo road race with help from his friend Wheely Applegate(played by Don Knotts). Trouble starts when jewel thieves hide a stolen jewel in Herbie’s gas tank(located in a spot never seen before or since!) Herbie has also fallen in love with a light-blue Lancia car also in the race, which is a distraction Jim didn’t need… Nice to see Dean Jones return, though the unexplained absence of both Buddy Hackett and Michele Lee is annoying. Really no better or worse than the previous film, with equally silly plot elements.