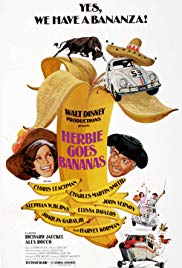 Storyline:
Pete Stancheck inherits from his Uncle Jim Douglas a race car being stored in Puerto Vallarta. With his friend Davy Johns (D.J. to his friends) accompanying him to P.V., Pete is dismayed to learn that the car is an older model Volkswagen Beetle. But when Pete and D.J. see what the car can do and learn that it somewhat has a mind of its own, they decide to enter it into the Brazil Grand Primeo formula one race. En route to Rio de Janeiro, Herbie, the car, gets Pete and D.J. into one predicament after another as it tries to help its new friend, a streetwise orphan named Paco, who Pete and D.J. encountered in P.V. and who stowed away in Herbie’s trunk. Because of these predicaments, Pete and D.J. end up requiring a quick influx of cash and slyly enlist the help of wealthy Louise Trent and her bookish niece, anthropology doctoral candidate Melissa, to be their financiers. Pete’s role in the scheme is to woo the shy Melissa, about which he feels guilty. But initially unknown to all of them…
Written by
Huggo
User Reviews: Vincent McEveety directed this fourth entry that sees Pete(played by Stephen W. Burns) and D.J.(played by Charles Martin Smith) gain temporary possession of Herbie from Jim Douglas, and have plans to enter it in a Rio De Janeiro car race, but need financial backing, so enlist two women(played by Cloris Leachman & Elyssa Davalos) to help out, but get sidetracked by a crazy ship captain(played by Harvey Korman) who dumps Herbie into the sea(!) and then is rescued by an orphaned pickpocket, and pursued by a smuggling syndicate. Awful film is utterly unfunny, contrived, and pointless, not to mention stupid. Forgettable sequel, best forgotten, though a brief TV series followed.