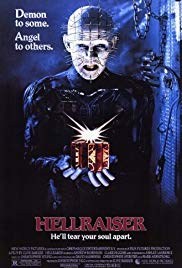 Storyline:
When Kirsty’s father, Larry, and stepmother, Julia, move into Larry’s childhood home, Kirsty and her boyfriend take a room nearby. Unfortunately for all involved, Larry’s house is already occupied: before the family’s arrival, Larry’s disreputable brother, Frank, used a supernatural puzzle box to summon a gang of other-dimensional demon sadists. Now, Frank requires a series of blood sacrifices to escape the clutches of Pinhead and the cenobites.
Written by
mrosesteed
User Reviews: I have seen Hellraiser many, many times; but my most recent viewing of the film was different to the rest. It was different because this was the first time that I’ve seen the film since reading Clive Barker’s novel "The Hellbound Heart". The novel both enhanced my enjoyment for the film, and exposed some of its flaws. With the book, Barker really allows the reader to get inside the character’s head, which ensures that the horror is more shocking. His descriptions are also a lot more macabre than what is shown in the film, and the way that certain things in the book are missed out/abridged shows some of the wasted opportunities of the story. This isn’t really a criticism of the film, but rather of books being turned into movies on the whole. People often say that the book is better than the movie; and in this case it’s true! Even so, Hellraiser is an absolute classic horror film, and easily one of the best of the eighties; not to mention all time. The plot simply follows Frank Cotton. Frank is a man in search of unknown pleasures, and in order to achieve that he buys a mysterious music box. This box does give out pleasure; but it’s inflicted by a band of demons, known as ‘Cenobytes’ – and their idea of pleasure differs from Frank’s! The story picks up when Frank’s brother and his girlfriend, Julia, move into the house where Frank was taken…

The main reason Hellraiser stands out among horror films is because of its themes. Barker weaves shades of love, eroticism and, of course, pain and pleasure into his tale of demons and scarred flesh – and this really makes the film. We can care for the characters and what happens to them because of what Barker puts between them, and it’s always evident that this film is head and shoulders above the rest of the schlock-horror sub-genre. The special effects, particularly on the screen time surrounding Frank, are simply stunning and show how real effects beat all this CGI rubbish hands down, while also showing that a low budget can be overcome. The film is never gratuitous with its gore or effects either, and everything in this film is there because it has to be. This is what annoys me about non-horror fans – films like this are dismissed by them because they’re "too gory" or "stupid" – but Hellraiser breaks the mould because it’s a truly original story and the way that Barker implements a macabre love story amidst a plethora of shocking horror is extremely skilfully handled, and more than challenges many of the so-called ‘A-class’ films.

A writer directing his own work tends to ensure that it will get proper treatment, and this is mostly true here. Some things have been changed from the book for no apparent reason (mostly with the characters of Larry and Kristy), but the only thing that really annoyed me was the ending. I suppose it’s due to the time that it was made, but the ending feels tacked on to me. Barker’s ending in the book was perfectly judged – just open enough to hint at more, while closing the story enough so that the reader is satisfied. Here, we have a schlock finale that is entertaining, but pulls away from the closed atmosphere that Barker has spent the film creating. This film differs from most other eighties horror films because of the fact that the actors are a talented bunch. You come to expect bad acting from this sort of film – but Hellraiser has none of it! The entire cast shine, with Clare Higgins making the biggest impression as the evil Julia. This was Clive Barker’s directorial debut, and at times, it’s clear that this is the case; but Barker makes the best of his locations, and while his camera sometimes feels enclosed; it fuses with the tragic music brilliantly, and all this helps the film to create that fabulous atmosphere so convincingly.

Overall, I have pointed out a couple of flaws here; but I really can’t bring myself to give this masterpiece any less than full marks. The originality on display throughout Hellraiser is astounding, as is the atmosphere and the performances pulled out of the actors, along with the fact that this film has entertained me many times and is still as good today as the first time I saw it. All of this ensures that Hellraiser will be an endearing favourite of mine for the rest of my life. If you consider yourself a fan of horror and haven’t seen this; shame on you. Make sure you read the book, too!

Storyline:A small-time triad member, played by Chow Yun-Fat, discovers a letter from an antique desk written by a young girl, played by Cherie Chung, who died from an illness years before. After her death, she was pos...