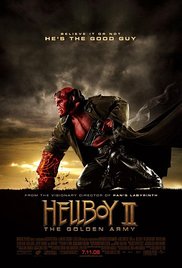 Storyline:
In this continuation to the adventure of the demon superhero, an evil elf breaks an ancient pact between humans and creatures, as he declares war against humanity. He is on a mission to release The Golden Army, a deadly group of fighting machines that can destroy the human race. As Hell on Earth is ready to erupt, Hellboy and his crew set out to defeat the evil prince before The Golden Army can destroy humanity’s existence.
Written by
ctfabian
User Reviews: Del Torro’s imagination is a beautiful thing. He has created some of the most fascinating creatures that traditional Hollywood doesn’t have the guts or inclination to ever assemble. I would take Guillmero Del Torro in the director’s chair any time any place, but Hellboy II shows that he is not without his flaws. Ron Perlman who is terrific as Hellboy doesn’t have anything truly interesting to say or do, the world around him is magical but the plot isn’t.

Hellboy is the most unique character to appear in your comic book shop. The mythology and the character are such the opposite of the main stream and to Hellboy II’s credit so is this movie. Ron Perlman doesn’t deliver catch phrases or gun down bad guys for the sake of doing so. He is an interesting character but he is overshadowed by this lackluster plot and the world around it. I felt as if we didn’t see enough of Big Red or maybe we did we just didn’t get to see the most of the talents. Del Torro constantly wants to remind you that he directed Pan’s Labyrinth because visually the creatures look like they were leftovers from that film. I don’t mind this per say but these characters just don’t have much to do, they are there really to look at rather than them having significance. Visually I can’t complain about them because they are amazing but they serve little purpose to the story.

The plot is really the weakest thing this movie has going for it. I felt it took too many liberties against the original concepts of Hellboy. Hellboy is a creature alive in our world, Del Torro tries to tell us that our world is nothing more than a division of fantasy and reality. Well we spend too much time in the fantasy that we forget the fact that this Golden Army is a threat to reality. The villain Prince Nuada is weak, we don’t see any method to his madness other than the fact that the plot dictates that he be the antagonist. In the first film and to a lesser degree this one we were given details about why Hellboy has faith in humanity and would chose not to serve his purpose. It’s interesting because we are given glimpses of what could have been something that could have added real teeth and tension to the story, for the first time Hellboy is tempted by evil, weakly tempted but tempted nonetheless. This mental struggle could have given our actors the chance to show their talent but instead the filler between the action scenes is just okay at best.

I didn’t hate Hellboy II I just think it needed some beef in it’s story. Del Torro has shown us he is a master storyteller but this time he didn’t focus on the story it’s self. I would recommend this film but I know Del Torro can and has done much better.

Storyline:Disgusted with criminals escaping the judicial system via technicalities, an idealistic young judge investigates an alternative method for punishing the guilty. Written by <[email protected]

Storyline:For years, the US government denied investigating UFOs but when an ultra-secret Pentagon program to study the Alien threat was exposed in late 2017, the world was stunned by this revelation. Nick Pope aka "T...

Driving While Black: Race, Space and Mobility in America (2020)

Storyline:Discover how the advent of the automobile brought new mobility and freedom for African Americans but also exposed them to discrimination and deadly violence, and how that history resonates today.User Reviews...

Storyline:Born into the seedy, underground world of prostitution, 15-year-old Shara has known no other life. Her mother is a career escort, who's now looking to Shara to make the kind of money she used to make in her ...

Storyline:This comedy showcases the laughs and overlapping love lives of a handful of raunchy stand-up comics at a late-night L.A. comedy club. Dukie's is an L.A. hot-spot featuring a lineup of both novice and notorio...

Storyline:Four childhood friends, now in their thirties, are having a reunion. Their lives have gone separate and very different ways. Together again they reminisce about their younger years, especially the eventful p...