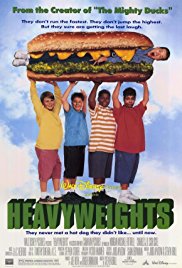 Storyline:
11-year-old Gerald “Gerry” Garner lives in Long Island, New York, and he’s overweight. Gerry’s parents Maury and Mrs. Garner decide to send Gerry to Camp Hope, a camp for overweight boys. The camp is owned by kindly Harvey Bushkin and his equally kind wife Alice Bushkin. When the Bushkins file for bankruptcy the camp has to be sold, it is bought by a wacko named Tony Perkis. Tony plans to force the campers to lose as much weight as they can, and he also intends to document the marathon shedding of weight and use it for an infomercial for his slenderizing program. In the eyes of the campers, Tony has made Camp Hope a living hell. As Gerry and counselor Pat Finley lead the efforts to overthrow Tony, the campers prepare for the Apache Relay against arch rival Camp MVP. The Apache Relay is a kind of race in which Camp Hope has never defeated Camp MVP before.
Written by
Todd Baldridge
User Reviews: Heavyweights is the story of a group of kids who with the help of their counselor go on a mission to take back their fat camp from a crazy man who has never interacted with kids before (played by Ben Stiller) who is intend on making it into a money making informercial.

I first saw this as a child, and absolutely loved it. I must have watched it again on at least 5 other occassions. Recently I was in the video store and came across a copy of it for sale. After convincing my friend to buy it , we went back to his house and popped it into the VCR. I wondered if the film would hold up after all these years. Did it? Absolutely! In fact I may have gotten bigger laughs this time around.

I do not understand why this film has a 5.1 rating, after reminding this movie to my friends they all recalled loving it, and everyone I recently watched it with loved it. Ben Stiller’s character is hillarious, and the rest of the cast is great. Besides Ben, Kenan Thompson is the only other actor in this who went on to become somewhat of a star, which is suprising because all the kids give great performances. Tom Mcgowan, the man who plays Pat, seemed to be chosen for the role because Chris Farley passed on it, and John Candy died, but he gives a great performance.

I know it sounds cliche, but Heavyweights is truly one of the few movies that people of all ages will love.