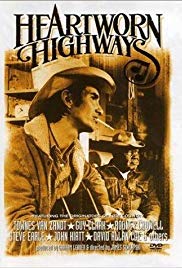 Storyline:
The best music and the best whiskey come from the same part of the country.
User Reviews: I was fortunate to have been invited to the first screening of Heartworn Highways when it was shown to the New York press in 1981. A young struggling musician at the time, I was mesmerized by the power and soul of these contemporary singer/songwriters. This is what "real" American country music was supposed to be, not the sequin fellas and big haired gals of Nashville. Years later I would have conversations with Guy Clark at the Crow’s Nest, a little bar in North Florida frequented by shrimpers and other assorted swamp rats about the "voice" of country music. Who would have believed that these magical music makers would become decades later, the bedrock for today’s true country. The director, Jim Szalapski, had been a friend and roommate in my younger days rambling through New York. We lost Jim a couple of years ago and with his passing went the genius that I will be forever grateful to for capturing the soul of American country music. Somewhere on that heartworn highway, Jimmy’s still looking out from a Mini-Cooper for a good story to tell. I’ve waited twenty five years to seen this film again, twenty five years too long.