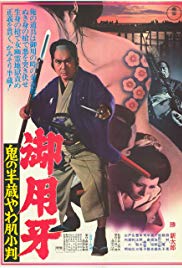 Storyline:
Follow the money. In a time of economic disaster for wage earners, Hanzo discovers a conspiracy among high officials to “borrow” gold from the shogunate’s treasury and loan it out to the destitute, including impecunious samurai – exacting either interest payments or family heirlooms from the debtors. Along the way, Hanzo extracts a confession from a ghost using his assaulting methods, foils thieves, connects with Heisuke Takei a friend from his youth, offers protection to a forward-thinking physician Genan Sugino who has defamed his ruler, discovers a pleasure ring of young wives and a blind music teacher, and cuckolds a corrupt official under his very nose.
Written by
<[email protected]>
User Reviews: Shintarô Katsu, best known for the Zatôichi films, again stars in this third and final movie in the Kenji Misumi (mostly known for "Lone Wolf and Cub), directed saga of Hanzo ‘The Razor’ Itami feature the big dicked one battling ninjas, rapeing ‘ghosts’, and uncovering shady goings on at the Shogunate treasury. The Hanzo ‘plot’ was kinda getting stale and repetitive. What was once novel in the first film, was not any longer. Fortunately, this one was better then the second thanks to having more humor. I’m just glad that they choose to stop at the one trilogy (I’m looking at YOU Lucas)

DVD Extras: Merely Trailers for all 3 Hanzo the Razor films