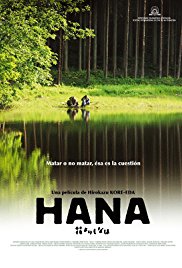 Storyline:
In 1702, set against the backdrop of a long-delayed and insatiable revenge, a reserved samurai, Aoki Sozaemon, leaves his hometown in Matsumoto to come to bustling Edo in search of his father’s killer. Unaccomplished as a swordsman, with his funds quickly drying up, Sozaemon must honour his clan’s demand to avenge a disgraceful death, however, when he finally finds his target, he will have to make a difficult decision before a crushing dilemma. Is the way of the samurai stronger than the way of the heart?
Written by
Nick Riganas
User Reviews: In ‘Hana’ Koreeda has turned from modern times to make another samurai-going-out-of-style movie, set in 1701 when "sword fighting has flown out of fashion with the wind." The film focuses on the cute Soza, played by boy-band singer Junichi Okada, who’s supposed to avenge the death of his samurai father (embarrassingly, in a fight over a go game rather than any battle), but would rather play go himself, soak in a hot tub, or teach neighborhood kids writing than practice his swordplay. Hana questions the very validity of revenge and war but unfortunately does so with an inept fighter and even a coward as a hero. Why this isn’t a good way of presenting alternatives to warlike philosophy is obvious: a hero is needed who can say "I can do it but I choose not to," rather than one who must say, "I can’t, so I better not." Despite the film’s considerable charm in presenting a variety of colorful characters and incidents — abetted by excellent acting, a realistic period tenement setting, and fresh-sounding western renaissance music — its main character becomes an embarrassment and a disappointment rather than a revelation. Unfortunately the young star’s appealing sweetness seems a mockery. As Mark Shilling of Japan Times has commented, Okada is "too handsome and cool to be a sympathetic coward. Too bad Bill Murray isn’t 20 years younger — and Japanese." Moreover (as Shilling also says) ‘Hana’s’ lively incidents are rather meandering, don’t interact very well, and don’t add up to climactic moments: the story line "lacks anything major." The natural impulse is to want the climax of a real revenge, the one Sozo is supposed to enact. Defeating such conventional expectations, the film feels longer than it is.

It may be that Koreeda, whose films have created a unique mood, means for ‘Hana’ to make us uncomfortable, and the colorful characters and rude toilet jokes are an intentional effort to put us off our guard. Certainly when the moment first comes when Soza is beaten up by a local punk in pink, Sodekichi (Ryo Kase), it’s horrifying and demoralizing because Soza up to then has been not only immensely simpatico, but a guy with a worthwhile function in the tenement house (nagaya) village — which Koreeda has departed from film tradition in making realistically rickety. Soza says he’s in the shabby place because (as introductory titles have told us) samurais are frequently undercover in such locations at the moment. When he learns his revenge-object, Kanazawa Jubei, is living nearby, it turns out one of his informants and café-pals knew it all along and the latter advises him to say nothing. "This samurai revenge thing is out of style," he adds. Besides, "with your skills" (i.e., the lack of them), "you’re doomed." ‘Hana’ makes this sort of point too bluntly and repetitiously.

The setting, which compares (as Shilling notes) to that of Kurosawa’s memorable flop ‘Do-des-ka-den,’ is a lively but pathetic community where people live selling scraps — and their own excrement, sold for fertilizer to a landowner, is worth more than the fruit of their labors. It’s a world where indignity is a constant, in which Soza’s humiliations seem almost normal.

The interest of ‘Hana,’ despite its not being Koreeda at his best, is that it reflects contemporary Japanese demoralization — a deep sense of the loss of traditional values as well as an equally strong sense of personal uncertainty in the old areas of machismo that once were strong. And it does this in a deceptively traditional-looking framework that shows how seductive and unavoidable Japanese tradition still remains. In that way, the director has been able to manufacture the same troubling unease that made his more powerful ‘Nobody Knows’ so riveting and disturbing. This still feels like a distinct misstep for the filmmaker — but he has seemed capable of doing something completely different almost every time — and no doubt what comes next will be a surprise, perhaps a more exciting one.

Shown as part of the San Francisco International Film Festival 2007.

Storyline:Indestructible to his enemies and irrestible to women, the professional assassin codenamed GOLGO 13 is shrouded in mystery and anonymity. If you're on his hit list your already dead. Always hired on his repu...

Storyline:In the late Tokugawa period, the Edo government is using Spies from Iga Province to cause the downfall of innocent provincial Daimyo. The Shogun needs to claim the assets of fallen clans in order to boost th...