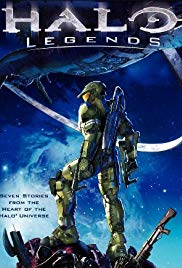 Storyline:
A collection of seven stories from the Halo Universe created by Japan’s most creative minds. First up is “Origins” a two part episode showing the expansive history of the Halo Universe and the history of the 100,000 year long franchise timeline, told through the eyes of Cortana. Second comes “The Duel” Taking place long before the Human-Covenant War, it tells the story of an Arbiter, Fal ‘Chavamee, who refuses to accept the Covenant Religion. Taking a turn to the Spartan side of the story “Homecoming” focuses on the tragedies involving the Spartan-II recruitment in 2517, and the Spartans coming to terms with their origins. Taking a turn in tone comes “Odd One Out” a non-cannon parody of the Halo storyline. “Prototype” tells the story of a Marine who goes against his orders to destroy an advanced prototype armor and uses the suit to buy time for civilians evacuating from the planet. “The Babysitter” tales of the the rivalry between the Spartan-II Commandos and the Orbital Drop Shock …
Written by
arorashadow_2003
User Reviews: I watched these as a long-time Halo fan who’s managed to get a solid OD of Halo life. I’ve read the books and seen all the extra content, I’ve debated back and forth with other fans and, more to the point, I’ve kept my sense of humour.

I loved Legends from end to end, although I despair a little at some of the people who can’t seem to get the different aspects of it.

Origins; Solid work with a good director and a great narrative. Although for people who’ve read the books and seen the time lines before, it’s nothing new.

The Duel; Showing signs of some of the great samurai movies of history, the change in depicting the Elites from vicious enemies to honourable warriors over the course of the games is only strengthened in this short. I loved the style, and I’m a die-hard fan of the ‘one strong man against an army’, why else would I enjoy Halo so much?

Homecoming; What’s with all the hate? If you’ve ever even tried to pick up the books you’ll know that this is pretty much another variation on the kind of thing that happened. The Spartans in training really were just angsty kids. Despite the size of Daisy in the flashbacks, she wasn’t any older then eleven or twelve at the time. And that kind of thing does have a very hefty effect on you, regardless. The Spartans did escape, they did try to run away, and they most certainly experienced those emotions. So despite the slightly clashing styles in animation between characters and background, I loved it, heck I nearly teared up.

Odd One Out; Now this was just funny. What a mish-mash of classically over-done, completely over-the-top anime clichés! Super powered kids, dinosaurs, a stupid lead character who comes out on top in the end… Throw in a few internet memes and you’ve got the kind of stupidity that made ‘Imma Chargin My Lazor!’ funny in the first place (and don’t pretend that you missed that bit, if you were watching it at all you’d have seen that face). Heck, even the Spartan’s call-sign was ‘1337’. All of you claiming to be serious fans, just why? Why think that nothing about Halo could be funny? Don’t tell me that you didn’t stick the original game on easy and chase Grunts around with a pistol to make them squeal. It’s literally just Halo for the Lulz. Secretly I have the opinion that most of you are people who would describe themselves as 1337 online too.

Prototype; Okay, yes, I know it’s a cliché plot, and the characters do seem very… familiar. On the other hand, the easter-eggs hidden among both the fight scenes and the flash-backs are worth finding for some classic references. But again, the Halo universe thrives on just this kind of heroism, one person staying behind to hold them back? Using powered armour? And he’s an inscrutable, seemingly emotionless man who’s a veteran of hundreds of battles? Are we not drawing parallels between 117 here, instead of some other characters named so far? Babysitter; Again I say what’s to hate? This is exactly the kind of situation that Spartans were deployed in. It’s exactly how they were viewed, and exactly how they would have acted, and how others behaved towards them. I’ve been waiting for a decent rendition of how the Spartans had to interact with others, the games, especially the early ones, showed the ODSTs as far too helpful. The other marines weren’t scared, they were impressed, and the military brass was altogether too happy to see them. The Spartans were freaks, as unlike the rest of humanity as the Covenant were, to some, with their green armour and faceless visors… Read the books kids, they might just open your eyes and shut some mouths.

And finally The Package; Brilliant, utterly brilliant. The spin-off game Halo Wars showed a couple of cut-scenes, highly rendered and beautifully directed, of what it was like having three Spartans take on the Covenant directly, including a fantastic case of direct hand-to-hand combat. This gave me the same feeling; the Spartans were unstoppable when they made their move, and particularly when they were led by 117, they never failed. Even if it killed them, they never failed. Plus, cameos are awesome.

I rate this highly, because I, much like the guys at Bungee (remember them, game creators?), have watched these shorts and not seen insulting values, but different and open takes on what the Halo universe has to offer. I’ve laughed with the funny stuff, and appreciated just how tragic the Spartans’ lives really have been, and that’s all there is to it.

Storyline:Imprisoned by a sorcerer who fears she will rob him of eternal life, guileless young Princess Arete befriends a villager who helps her plan an escape.User Reviews: