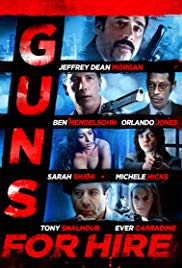 Storyline:
Beatle is a quirky loner who refuses to live by society’s rules. Her business cards read “Towing/Assassination,” and she even has a hit man infomercial to go along with it. Her only human contact is with her psychiatrist and the stripper/hooker she employs once a week. Everything changes the night she meets Athena Klendon, a suicidal blonde with a secret. With a demented killer on their tail, courtesy of Athena’s crooked former employer, the two quickly strike a bargain. Athena will change her life insurance policy to reflect Beatle as the beneficiary in exchange for her own execution. And while they wait for the paperwork to come through, Beatle will provide room and board and get some extra help on her infomercial. The two have no idea that Detective Holt has been on their case reviewing their every move. Just when he thinks he’s got Beatle pinned beyond a shadow of a doubt, this comedic mystery takes a wild and unexpected turn.
Written by
anonymous
User Reviews: Considering a somewhat acceptable rating of 5.4/10 and how absolutely awful and embarrassment of a movie this is to everyone involved, I can only come to the conclusion that the higher ratings were from either people directly involved or people that were paid to fix the rating (their are legitamite businesses that specialises in that).

I don’t know what got somewhat respectable actors like Jeffrey Dean Morgan, Orlando Jones and Tony Shalhoub to appear in this tired crapfest, and based on their performances (which are their worst of their careers by far) I can only suspect that they were dared into making appearances in it or something.

The reason I gave it a 2 instead of a 1 is because I have to be honest, I stopped watching halfway through, there was literally nothing that was remotely interesting. Not even the terribly constructed cheesy lesbian sex-scenes (which starts already by the startcredits of the film) could keep my interest.

Oh yeah the movie was filmed 10 years ago, but no company wanted to release it. Then Jeffrey Dean Morgan got signed on for a role on the biggest TV show on earth THE WALKING DEAD, and what do you know all of a sudden there was interest enough to release it and so it was in the last week of 2015. But he’s not the lead for the record and again, truly terrible.