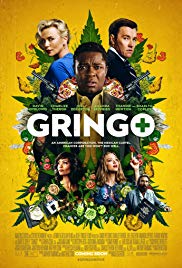 Storyline:
An exhilarating mix of dark comedy, white-knuckle action and dramatic intrigue, Gringo joyrides into Mexico, where mild-mannered businessman Harold Soyinka (David Oyelowo) finds himself at the mercy of his back-stabbing business colleagues back home, local drug lords and a morally conflicted black-ops mercenary. Crossing the line from law-abiding citizen to wanted criminal, Harold battles to survive his increasingly dangerous situation in ways that raise the question: Is he out of his depth – or two steps ahead?
Written by
Amazon Studios
User Reviews: A straight-laced, play-by-the-book, honest Nigerian named Harold (David Oleyowo) is getting dumped on by everyone he knows: his boss Richard (Joel Edgerton), his wife Bonnie (Thandie Newton) and even his boss’s partner Elaine (Charlize Theron). If you want to call him a good man that wants to do the right thing and please everybody then you can call him that. If you want to call him a sap that is ninja level naive then I would say that’s a better description. He is so trusting and naive it’s nauseating. The company he works for is involved in some illegal dealings and things go awry when he and his superiors go to Mexico.

To put it simply: I wasn’t feeling this movie, not even from the beginning. Is it a comedy? Is it a drama? Is it an action? Is it a crime mystery? I was lost hence I didn’t know how to treat the movie. One thing it wasn’t, it wasn’t good. It was full of hyperbole characters that you were supposed to love or hate: I hated them all–including the main character. Harold was so gullible he bordered on special needs. His boss, Richard, possessed every trait that you’d hate in a person which made him uber-unlikeable. His boss’s partner, Elaine, had an ambiguous role in the movie but she certainly was a living, breathing setback for the #metoo movement. And Harold’s wife, Bonnie, seemed to be in the movie only to complete the picture of how naive and pathetic Harold was.

The plot was not much better than the characters. It was a David and Goliath/Little Engine that Could/Underdog story that wasn’t told any better than the millions of movies with such a plot before it. I think if the movie went all out comedy it would have been so much better. They were already using caricatures for the characters and there were a few funny scenes so they should have gone even more extreme with it and then we’d have something. But instead they were stuck somewhere between "to be funny or not to be funny? That is the question." So they just failed.

Storyline:In order to take a new job as an employee in the public sanitation department, Juliana moves from the inner city of Itaúna to the metropolitan town of Contagem in Brazil. While waiting for her husband to joi...

Storyline:While working the graveyard shift at a newspaper factory with his three best friends, Dalen Gus has plans to write the next big screenplay for Hollywood. But when Dalen meets Ellie, the new and eccentric gir...

Storyline:Aga, an Inuit woman who is holding on to life in her deathbed undertakes a mysterious journey, travelling through different people who have close ties to the sea.User Reviews: