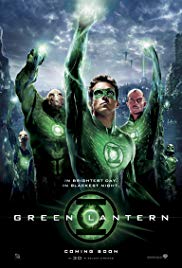 Storyline:
In a mysterious universe, the Green Lantern Corps, an elite defense force of peace and justice have existed for centuries. Reckless test pilot Hal Jordan acquires superhuman powers when he is chosen by the Ring, the willpower-fed source of power. Reluctantly at first, he takes on the challenge after the death of Abin Sur, the finest Green Lantern. Putting his self-doubts aside, and spurred on by his sense of duty and love for his beautiful, intellectually equal, colleague, Carol Ferris, he is soon called to defend mankind from Parallax, a powerful, evil being who feeds on fear. Hal Jordan is the universe’s last chance, as many Green Lanterns have been killed and the Corps is weakened. And he might just be the right Green Lantern for the duty of keeping the world safe from harm.
Written by
Production
User Reviews: In 1938, comic Imigination arrived at Dectective Comics with the Introducted of the Dark Knight also called The Batman. Before long a plethora of others soon followed, among them was the mysterious " Green Lantern. " Hal Jordan AKA Green Lantern are both played by Ryan Reynold. The story reaches back to the 20th century and the space age. Here we find our hero and his special selection by a celestial being who reaches into his chosen’s human heart to learn that he possesses true Courage and no fear. That, then is the primary ingredient for his selection and the gist of the legend. Once you enter the myth of the Green Lantern, you also enter the vast din of the Universe and it’s mystical powers, where beings from other planets are collected to fight their Nemesis, . . . Fear. This film does it’s best to take our Hero and the audience to their world and the battlefield of the Universe. It’s a fabulous journey and one which is responsible for the enjoyment of the cinema, A great slice of DC comics transformed into the stuff of imagination and the world of Entertainment. Recommended to all. ****