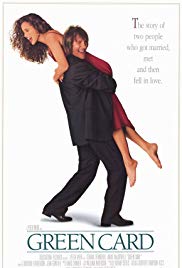 Storyline:
In New York City, American Brontë Parrish and Frenchman Georges Fauré enter into a marriage of convenience, they not even actually meeting, introduced by their mutual friend Anton who arranged the union, until the day of the civil marriage ceremony. Brontë and Georges expect never having to see each other again until they file for divorce and have each gotten what they want out of the marriage. The reason for Georges wanting to be married: he, an aspiring composer who has been is the States for five months, has long overstayed his tourist visa, and wants to be a permanent resident to get his green card, marrying an American which will solve that issue. The reason for Brontë wanting to get married: she, a horticulturist, needs to be married to be accepted as the new tenant for her dream apartment, which contains a greenhouse with a collection of exotic but currently neglected plants, plus an expansive patio where she can grow plants for her research. Their plans are thrown for a loop …
Written by
Huggo
User Reviews: I’m normally not too much a fan of Gérard Depardieu, at least not when he plays a role in a movie that isn’t French. But this time I was willing to make an exception and the main reason for that is because I was interested in the subject of fake marriages in order to be able to stay in the country permanently. It’s a problem that is all too known known over here as well and I couldn’t think of any other romantic movie that dared to use this subject. That’s why I was curious about it.

George Fauré is a French citizen who has been offered a job in the U.S.A., but before he can start working, he’ll need a work permit. Since it’s very difficult for him to get one, the easiest way is to marry an American woman. Brontë Parrish loves plants and has dedicated her entire life to them. Now she has found a wonderful flat with its own greenhouse, but there is one problem: the flat is for married couples only. The best solution for both is a marriage, but to convince the immigration officers that they are married for love and not out of convenience, they must move in with each other and try to cope with all the difficulties that this will bring…

It wouldn’t have been a romantic comedy / drama if there weren’t the necessary complications between the two people, so in that perspective this certainly isn’t an original movie. But there is one difference: normally this kind of movies never shows a marriage of convenience, as it is something that doesn’t belong in the perfect image of love and happiness that this kind of movies wants to portray. Fact is that it is a ‘daring’ move – although only to a certain extend – that really works. I really didn’t have any problem to believe that in reality Brontë and Georges would never marry because their worlds are too far apart. And I admit that I was still a bit surprised when seeing the end of the movie. Of course their ideas about each other change, this is still a romantic movie, but it was all done in a very decent way.

Overall the acting in this movie is quite good. Despite the fact that I had my doubts about him before watching the movie I must admit that I even liked Depardieu, probably because he didn’t have to conceal his awful French accent when speaking English. He more or less could be himself this time and that’s good. Also nice was Andie MacDowell’s performance and I loved Jessie Keosian as the noisy landlady.

All in all this is an interesting romantic drama – I wouldn’t really call it a comedy – that offers a good story and some nice acting. It’s perhaps not the best in the genre, but it’s certainly better than average. That’s why I give this movie a 7/10.

Storyline:A friendship forms between a never-aging 10-year-old vampire and an orphan schoolboy, but a moon headed monster throws obstacles in their paths.User Reviews: I was fourteen when the little vampire cartoon wa...

Storyline:Bepi is a gondolier and he wants to marry Nina. Bepi, however, likes exotic girls. So Nina, after a fight with Bepi, decides to marry Toni who is richer, who is liked by her family and who is the owner of a ...

Storyline:A money order from a relative in Paris throws the life of a Senegalese family man out of order. He deals with corruption, greed, problematic family members, the locals and the changing from his traditional w...

Storyline:A film about the life and relationships of the early 20th century American educator, editor, and journalist Leonie Gilmour, the mother of the acclaimed artist and architect Isamu Noguchi.User Reviews: This i...

Storyline:Quasimodo (Sir Anthony Hopkins), the hunchback bellringer of Notre Dame's cathedral meets a beautiful gypsy dancer, Esmeralda (Lesley-Anne Down), and falls in love with her. So does Quasimodo's guardian, the...