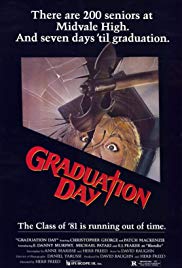 Storyline:
After a high school track runner, named Laura, suddenly dies from a heart attack after finishing a 30-second 200-meter race, a killer wearing a sweat suit and a fencing mask begins killing off her friends on the school track team one by one. The suspects include the track coach Michaels, Laura’s sister Anne who arrives in town for the funeral, the creepy school principal Mr. Guglione, and Laura’s strange boyfriend Kevin.
Written by
matt-282
User Reviews: Graduation Day almost came close to being the first horror movie that I ever saw. In the area where I grew up, there were two local video-shops just meters away from each other. One of them was as strict as a nazi head teacher and wouldn’t let the eleven year old little-me rent out any 18 rated movies. Luckily, the other guy just wanted to see the colour of your money no matter how old you were, and that’s where I spent most of my weekly pocket money! Whilst looking at the ex-rental films for sale, I found this eye catching hand-drawn cover, which was graced with a warning sticker that threatened, ’85 minutes of sheer terror whodunit!’ Now when you’re that young and in-experienced, those words sound extremely intriguing and even rebellious, because I knew that I was doing something that I wasn’t yet lawfully supposed to. I took it up to the counter and five minutes later the big sweaty guy returned and told me that the tape had been damaged and he no longer had it. My little world had been shattered, so I asked if I could keep the box for future reference and disappointedly headed home. Around that time, the movie had been deleted and it seemed more likely that I’d find the body of Jimmy Hoffa in my lunchbox than eventually get to view the damned thing. The more I looked at the box-art that promised  Grisly, gruesome murders’ and terror beyond my wildest dreams, the more I longed to find out if it could truly be as terrifying’ and grisly’ as the beguiling blurb had made out. My curiosities never died and some seven years later, when I first learned of Video-search agencies, this was one of the first movies that popped into my head to track down. Finally I managed to get hold of a gleaming copy, knowing that it would have to be an unsurpassed masterpiece to play up to the strong expectations that seven years had built up in my overactive imagination. The point that I’m trying to make is that I hold a lot of sentimentality for Graduation Day, so excuse me if you think that I’m mad after you’ve read this review!

The first sequence was like a bizarre sportsman’s dream. A load of budding athletes hop, skip, run and jump in synchronised timing with a disco tune that makes Abba sound like the most cerebral band on the planet. Tactfully, the lyrics say something about everybody wanting to be the winner’. (Get it, athletes and winners?) Director Herb Freed does some of his trademark quick-time cutting that’s fast enough to make Mark Goldblatt blush. It’s a technique that was evident in his previous offering, Beyond Evil, and the first time that I saw it, I was very impressed. Graduation Day is just overflowing with the method, which involves chopping two scenes together consistently until they build up to a climax. Good once, but after the fifteenth time I was beginning to wonder how much more he could possibly milk the idea. Here he chops between footage of shot put, hurdles, gymnastics and an audience that were clearly watching something completely different. The camera finally settles on one event, the 100-meter dash and a sprightly young teen called Laura Ramstead bursts into an amazing lead. Cheered on by her Coach (Christopher George), the youngster sprints over the finishing line, leaving the opposition more or less at the starting post! Pandemonium breaks loose in the stands, but the runner screams in pain before falling to the floor. Her track team rush to the rescue, led by her boyfriend, Kevin (E. Danny Murphy), but sadly they’re too late  she’s already dead. Next up we meet her elder sister Anne (Patch Mackenzie), who’s taken leave from the Navy to visit Midvale high and collect Laura’s trophy at the Graduation ceremony. Almost as soon as she arrives in town, a jogger is murdered by an unseen someone with a switchblade and a stopwatch. Soon all the members of the track team begin suffering unfortunate demises at the hands of the hooded assassin, who crosses their faces off of a group-photo with bright red lipstick. It begins to look suspiciously like Anne is inflicting her military training on the hapless students, but if you’ve seen more than one slasher movie, you’ll know that there’s bound to be a twist in there somewhere

I do agree that Graduation Day is probably the daftest of all the period slashers. However, I must confess, that I really don’t think that it’s all that awful. I know, I know, you must think I’m crazy, but watching it last night whilst taking notes for this review, I actually rather enjoyed myself. It managed to keep me interested and the cheesy thrills make a worthy alternative to competent horror. Christopher George turns out a decent performance and the jesting banter between B-movie vet Michael Pataki and Broadway star E.J. Beaker actually works. Admittedly it looked as if screenwriter David Baughn was stuck in the Rock Hudson/Doris Day era, but as light comic refreshment, they made a good job of it. Even the youngsters weren’t all that bad, you’ll spot a young Linnea Quigley and an infamous early appearance from Vanna White, who spends most of her screen time screaming unconvincingly!

Herb Freed has tried to include everything that was in vogue in 1981. There’s a roller-disco, loads of ear-bashing heavy metal and the surviving girl even fends off the killer using (somewhat lame) martial arts, which was pretty hot stuff at the time. (Oh, the days of the ninja!) The direction was somewhat sluggish, but the scene in which the hooded-killer sneaks along a window behind an unsuspecting victim was impressive and some of the music was quite neatly produced.

The Graduation party is by far the most annoying ten minutes ever filmed. A musical group by the name of Felony’ takes centre stage at the disco, where teens whiz round in circles on roller skates! They are truly the worst rock’ band that I’ve ever heard in my whole entire life. With their faces painted like seventies glamsters Kiss, they sing a painful song called Gangster Rock’, which is no shorter than seven minutes long and just repeats the same verse and chorus over and over again! They’re terrible, with a singer that has extreme vocal limitations and not even a decent song for him to attempt to sing. They seriously ruined an otherwise comical sequence that includes Quigley being pursued by the psycho in a fencing mask. Joseph Zito said on his commentary for The Prowler that all the slasher directors were competing to find the scariest mask after Michael Myers’ fearful Shatner impression. Quite what made these guys dig out a Fencing visor was somewhat dubious, but it must’ve impressed John Ottman, because he borrowed’ it for his Urban Legend follow up!

It looks as if Freed blew his entire budget on the actors and hiring that abysmal rock band, leaving him with nothing to spend on effects. The gore scenes are so fake that they’re derisory, including perhaps the worst decapitation that I’ve ever seen. Look out for the blatant dummy that’s supposed to be a corpse, hanging on the door at the end of the movie. In one murder, a teen is killed by an American football with a sword stuck through the middle. The killer throws it from quite a distance and it manages to slice straight through his stomach. Now that’s some throw!

Ok so if you’ve done your research then you’ve probably already found out what most people think of Graduation Day. If you’re unsure, then trust them, because my opinion may be biased and it’s certainly a minority. For what it’s worth I found it to be an enjoyable little cheesy frolic, with the added bonus of Christopher George before his demise in 1983. Impressive box-office (nearly $24 million from a much smaller budget) makes me wonder why they didn’t make a sequel? It’s scary, thinking that this could have become a franchise, imagine Freddy vs. Jason vs. The fencing mask killer! Wow that sounds great! Be warned this is only recommended to bad cinema fanatics. If you’ll still confused, just know that Troma recently re-released it and you know what sort of movies they like!