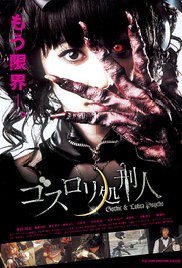 Storyline:
Her beloved mother murdered by a vicious gang of assassins, young Yuki (2007 Best Buttocks Award-winner Akiyama) transforms herself into a gothic lolita killing machine, wielding a lethal umbrella that can blast, slice, and chop her enemies into oblivion.
Written by
Anonymous
User Reviews: Gothic and Lolita Psycho (2010) is a black-and-comedic horror action film directed by Go Ohara this movie aired September 4, 2010 in japan. About Yuki an ordinary girl who lives with her mom and dad, they live in tokyo city, until one day on yuki’s birthday, suddenly a group of gangs attack and enter Yuki’s house. The gangs killed her mother. Yuki is hurt and starts to rise to take revenge against those who have destroyed his family, Yuki transformed into a strong girl and wore black clothes he was accompanied by a very sophisticated umbrella, the umbrella was equipped with a knife to a firearm. Yuki manages to kill one by one his mother vanishes and only one person lives for Yuki to wipe .. Will Yuki manage to take his revenge? This movie is so exciting that I who watch this movie do not want to miss a scene of sadistic Yuki fight and enemy enemy is so fun. The scene of action is so fond … There is a lot of blood, gore and all the cruelty of this movie …

Storyline:As change sweep Japan, an honest man joins the Shinsengumi out of respect for their leader and because he wants to live and die as a samurai. However, as his involvement goes, reality and idealism come into ...

Storyline:In medieval Japan, aging Rokubei, his younger wife of four years Osugi and her uncle run a tenement complex at the bottom of a cliff, the complex which from the naked eye at the top of the cliff looks like n...

Storyline:Newlyweds Adam and Lynda have the perfect life. They are completely enamored with each other and Adam has just sold a technology patent for millions. However, their marital bliss soon fades when Lynda begins...

Storyline:Two brothers seek revenge on the yakuza for the death of their father.User Reviews: I was lucky to see this amazing film as part of a Suzuki showcase at the School of the Art Institute of Chicago. A young m...

Storyline:A 48-year-old company chief, Yukihiro Fujiyama (Koji Yakusho) goes to a hospital. There he discovered that he has got terminal lung cancer and will die within half a year. He declines any treatment and decid...

Storyline:Released from reform school, the Girl Boss (Yuko Kano) and her girl gang enter in conflict with another girl gang who are allied to the powerful Yakuza Boss (Toru Abe). The Girl Boss teams up with a single, ...