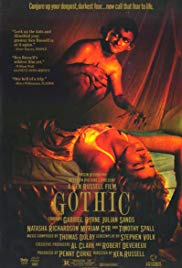 Storyline:
Story of the night that Mary Shelley gave birth to the horror classic “Frankenstein.” Disturbed drug induced games are played and ghost stories are told one rainy night at the mad Lord Byron’s country estate. Personal horrors are revealed and the madness of the evening runs from sexual fantasy to fiercest nightmare. Mary finds herself drawn into the sick world of her lover Shelley and cousin Claire as Byron leads them all down the dark paths of their souls.
Written by
Susan Southall <[email protected]>
User Reviews: Gothic, directed by Ken Russell, is a rather interesting film that deals with, among other things, the dark side of creativity and imagination. More specifically, it’s about the night when Mary Shelley came up with the idea that she would later turn into the novel "Frankenstein." By and large, the performances are quite good, although I didn’t really care for Julian Sands. However, the story was almost non-existent and ephemeral, existing merely to have a bunch of people go around saying stuffy lines and get scared out of their wits by creatures borne of their imaginations. Granted, some of these sequences and images were haunting and surreal, but it all added up to a lot of style with very little substance. As far as the score is concerned, I thought that the work Thomas Dolby did was impeccable as far as its musical quality, but some of the cues didn’t really fit (to me) with this kind of period piece. The story takes place in the early 19th century, but a lot of the music sounded very 1980’s with synthesizers and programmed drums. It’s a score that I’d buy, but I’m not too sure that it completely fit the film. From a technical standpoint, I thought it was very well-made, i.e., it was well-lit and the shot composition was varied. There were also some Dutch angles that accentuated the disorienting feel the filmmakers seemed to be going for. Overall, if you’re looking for a well-told story that has characters you care about and identify with, this might not be the best choice for you. However, if you like heavily stylized and surreal horror, this will probably suit your fancy.