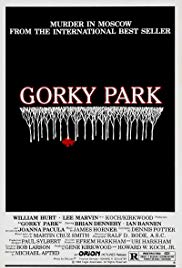 Storyline:
An investigator on the Moscow police force relentlessly pursues the solution to a triple homicide which occurred in Moscow’s Gorky Park. He finds that no one really wants him to solve the crime because it is just the tip of a complex conspiracy which involves the highest levels of the Moscow city government.
Written by
Mark Logan <[email protected]>
User Reviews: Though the story does drag a bit in the telling, Gorky Park is a good look at what turned out to be the birth of post Soviet Union Russia.

First and foremost Gorky Park is a murder mystery, despite the politics. That’s what William Hurt is all about, he’s for want of an American term, a homicide cop with the Moscow PD. He’s been handed a nasty triple homicide, three young people, two men and a woman whose faces and finger prints were mutilated making identification a challenge.

Of course this was done for a reason and soon Hurt finds himself up to his neck in a turf struggle with the Soviet KGB. There’s an American businessman played by Lee Marvin who’s in the mix as well as Russian pathologist Ian Bannen and an American homicide cop Brian Dennehy. Hurt also gets involved romantically with Soviet dissident Joanna Pacula and it turns out she’s the key to the whole case.

The film was shot in Stockholm, Helsinki, and Glasgow all cold climate cities that serve very well as location stand ins for Moscow. Best in the film is Lee Marvin who went back to playing bad guys as he did in his early years for this one.

In the turf struggle depicted between the Moscow Police and the KGB you see a whole lot of issues talked about and you can see why the Soviet Union fell apart as it did. Too bad the story couldn’t have been better told in a tighter screenplay.