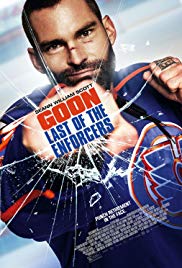 Storyline:
It’s a new day for the Halifax Highlanders. A pro lockout has reunited old teammates and brought a crew of new players to the bench; notably missing from the line-up, however, is everyone’s favourite enforcer and heart of the team, Doug “The Thug” Glatt. Sidelined after one too many hits and now married with a baby on the way, Doug is hanging up his skates and settling into life as an insurance salesman. But when Doug’s nemesis, Anders Cain, is made captain of the Highlanders and new ownership threatens to tear his team apart, Doug is compelled back into action. Ignoring the wishes of wife Eva, Doug heads to the rink, discovering an unlikely training partner in fellow retired enforcer and one-time arch rival, Ross “The Boss” Rhea. Together with grit, passion and unrivaled loyalty, they will grind out one last chance to do what they do best…protect their team.
Written by
Subrat Jain
User Reviews: Some will say that a sequel can never live up to the first film.

Goon: Last Of The Enforcers begs to disagree.

I was impressed with the writer’s ability to squeeze another story out of Doug Glatt and the Highlanders. The story was very well done, and I enjoyed the fact that it managed to incorporate Liev Schreiber’s character once again, in an enjoyable way that you may not be expecting. I enjoyed the inclusion of adult life, Doug having to balance hockey and an incoming child. The dramatic bits are very well done, and make you care for the character that much more.

Jay Baruchel’s direction is also top notch, especially from a first time filmmaker. The fight scenes are gripping and bone-crunching, as are the hockey games themselves. Paul Sarossy’s cinematography is very versatile and impressive, making the hockey and fight scenes a joy to look at.

Of course, there’s the comedy. Seann William Scott is hilarious as lovable but dopey Doug Glatt. Jay Baruchel reprises his character from the first film and is just as hilarious as he was the first time around. The locker room antics of the team are also just as gut-busting as ever.

This film is humorous, touching and moving, and is on par with the first in terms of quality.

If you enjoyed the first Goon, then you’ll love this one. I highly recommend this one.

Storyline:Follows 29-year-old immigrant sex worker Debra, and her self-aware 10-year-old daughter Mona, as they embark on a journey of emancipation. Debra attempts to escape cycles of abuse and poverty while learning ...

Storyline:A woman returns to her childhood town after splitting from her husband. The town is gripped by a spree of burglaries. As she left under a cloud the town's gossipers think she might be involved.User Reviews: ...

Storyline:After losing their only grandson in a car accident, grief-stricken Audrey (Sheila McCarthy) and Henry (Julian Richings), a doctor, kidnaps his pregnant patient with the intentions of performing a "reverse Ex...

Storyline:Ferdi is ugly. And he desperately wants a girlfriend but he can't because: ugly. One day however he meets Jona and Jona is blind. For the first time in his life, there is hope. What Ferdi doesn't know is tha...

Storyline:A young penguin, driven by his instinct, embarks on his first major trip to an unknown destination.User Reviews: The March of the Penguins story could continue indefinitely, but only if the penguins survive ...