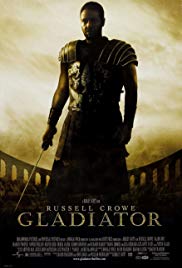 Storyline:
Maximus is a powerful Roman general, loved by the people and the aging Emperor, Marcus Aurelius. Before his death, the Emperor chooses Maximus to be his heir over his own son, Commodus, and a power struggle leaves Maximus and his family condemned to death. The powerful general is unable to save his family, and his loss of will allows him to get captured and put into the Gladiator games until he dies. The only desire that fuels him now is the chance to rise to the top so that he will be able to look into the eyes of the man who will feel his revenge.
Written by
Chris "Morphy" Terry
User Reviews: Most films require that the viewer identifies with the character to truly be engrossed with the film. If you can’t feel something for the character, than the audience is lost.

Luckily, in Ridley Scott’s case, Russel Crowe is so captivating and convincing as a general loved by his troops and as a slave loved by the people that the movie really works. Possibly one of the greatest actors today, Crowe carries this epic film on his very capable shoulders.

Not to say that he is the only reason this works. The supporting cast, most notably Connie Neilsen, buoy the film to new perspectives.

Jacquin Phoenix definitely captures the egotisitcal persona he should display, stealing every scene he’s in. Phoenix will surely be put on the map with Gladiator.

But the real shining star in this film are the incredible action sequences which jolt the viewer right in with the opening sequences, as Maximus’ true worth to the Roman Empire is displayed. Scott’s camera work within these completed sequences takes a modern twist that really works for the gruesome scenes.

Crowe will now get the respect he deserves for this collosal performance. Gladiator makes the most of its 2 and a half hours, marking a triumphant comeback for the long forgotten epics of the classic days of film. ALL HAIL MAXIMUS!

Storyline:Emmy winner Bob Odenkirk (Better Call Saul, The Post, Nebraska) stars as Hutch Mansell, an underestimated and overlooked dad and husband, taking life's indignities on the chin and never pushing back. A nobod...