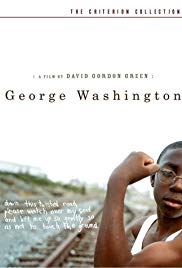 Storyline:
Set in a small town in North Carolina, George Washington is the story of a tight-knit multi-racial group of working-class kids caught in a tragic lie. After a twelve-year-old girl breaks up with her boyfriend for a sensitive, deeply introspective thirteen-year-old boy named George, a bizarre series of events and an innocent cover-up launches their insular group on individual quests for redemption.
Written by
Anonymous
User Reviews: George Washington is the kind of film I instantly respond to for the simple reason that it is pure, perfect cinema. This is what FILM can do when free of the constraints of popular movie-making. When it ended it made me think of that old saying "a picture is worth a thousand words." Well what happens when that picture moves? You get George Washington. I don’t want to spoil the film for anyone reading this by needless plot exposition that I find so annoying in most professional reviews. But the film does center around a small American town, and a group of poor children during the long, hot summer months. This film has absolutely wonderful cinematography, better than most big budget Hollywood films, and the mood it sets is alternately playful, melancholy, surreal, and poignant. Many times I was reminded of my own childhood; scenes play out in a very organic way and the actors, mostly children, are all wonderful. Before I saw this film I had heard that one of the director’s influences was Terrence Malick, a filmmaker I love dearly, and George Washington reminded me a lot of Malick’s "Days of Heaven." He uses voiceover in much the same way Malick did in that film…alternating between narration, random thoughts, and character exposition. The voiceover use in this film, as in Days of Heaven, is spoken the way someone might hear their own thoughts. Watch the movie and you’ll see what I mean. Although the movie is about children, it’s not really "for" kids, but I would venture to say that any kid from about age 12 and up would be all the richer for seeing this movie. However in this age of short attention spans, and video game editing I don’t hold out much hope that many kids would appreciate a film like this. But for adults, especially lovers of the cinema, this should be required viewing. It’s up to us support these kinds of movies so we can see more of them in the future. I saw this for free on the independent film channel, but I plan on buying the DVD anyway…George Washington is a film I will be proud to add to my collection. I loved it.