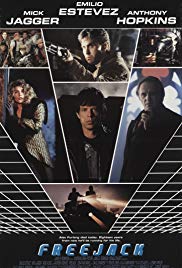 Storyline:
Auto racer Alex Furlong is snatched by time travel, a split second before a fatal explosion, by Vasendak’s 21st-century team of techies, who plan to sell his healthy body to an ailing rich man at McCandless Corporation, for a mind transfer. He escapes, but has no rights in this nightmare future of violence and sleaze. The story concerns his survival, and his attempt to revive his relationship with his fiancée Julie, now 15 years older and an executive at McCandless.
Written by
Will Briggs <[email protected]>
User Reviews: You know, one thing that really bothers me is the amount of people who just refuse to relax and watch a move without having to consider whether it should win an Oscar. I don’t think Freejack was ever intended to be made for serious viewing – I think every actor in it at one time during the movie has got their tongue in their cheek.

What you do get in this movie are some spectacular effects, and I’m not talking about the end when you could just as soon go get a sandwich rather than watch the 2001-type slideshow.

It’s just downright funny. Mick Jagger as the villain giving Emilio Estevez a "headstart" by counting 1-Mississippi, 2-Mississippi is priceless. David Johanson shines as the shyster in any timeframe. Rene Russo gives us an early indication of screen presence. So just relax and have fun with it.