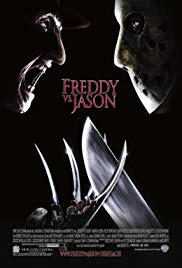 Storyline:
It’s been nearly ten years since Freddy Krueger terrorized people in the dreams, and the towns folk want to keep him erased from their memory. Freddy still has one more plan on getting back to Elm Street. He resurrects Jason Voorhees and sends him off to kill. The more bodies which fall to the ground, the stronger in which Freddy becomes. This is until, Freddy realizes that Jason isn’t going to step aside easily, and must be taken down himself.
Written by
Film_Fan
User Reviews: Okay, I’m not really a fan of the Nightmare on Elm Street or Friday The 13th. I don’t know why I decided to watch this but I did and it seems to be pretty satisfying. The plot is that Freddy is forgotten on Elm Street because a town-wide conspiracy is in place so nobody even mentions his name. Because of this he is losing power but not enough however to resurrect Jason. The bodies start piling up and the conspiracy slowly becomes unraveled, giving Freddy the power needed to do what Freddy does best… Unfortunately it seems that resurrecting Jason didn’t come with an off switch or something and they decide the town’s not big enough for 2 of them. While it does feel as though it takes a while for Freddy and Jason to finally fight seeing them kill in ways fans know and love (or even something I haven’t seen and that’s one where Jason kills people while he’s completely set on fire!) and Robert Englund hamming it up is so entertaining to watch regardless. Even the ideas of having there being one fight in Freddy’s dream world and the other in the real world being clever considering one of them has an advantage and disadvantage in both worlds. I’d say if you’re into watching cheesy fun then I’d recommend this. It does deliver what you would expect from Freddy and Jason being in the same movie (or even more-so for me considering I actually think this is the best Friday The 13th related movie I’ve watched so far). If you want to watch it, I’d recommend it.