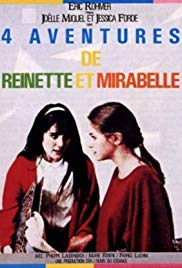 Four Adventures of Reinette and Mirabelle (1987)

Storyline:
Reinette and Mirabelle are two young girls. Reinette lives in the countryside, Mirabelle in Paris. They meet during a holiday of Mirabelle in the country, when Reinette helps her to repair the tube of her bicycle and shows her the beauties of nature and in particular the ‘blue hour’. They like each other and decide to take a flat together in Paris, where they’ll attend at the University. But isn’t so easy to live together when the characters are so different: as Reinette is simple and enthusiastic, as Mirabelle is obscure and lazy.
Written by
Maurizio Semolic <[email protected]>
User Reviews: The more Rohmer I see, the greater my appreciation and love grows for him. Four Adventures of Reinette and Mirabelle is a wonderful film about a Parisian girl and a girl from the country who meet, become friends, and then move in together in an apartment in Paris. The film consists of little more than the two girls living their lives, sharing their philosophies, and acting on those philosophies. The two lead performances, by Joelle Miquel (Reinette) and Jessica Forde (Mirabelle) are outstanding. And then there are a lot of colorful – but not too colorful – side characters in the four tales, like the extraordinarily rude waiter (Philippe Laudenbach) and the art dealer (Fabrice Luchini, the star of my favorite Rohmer film, the incomparably unique Perceval le gallois). This is a film for people who love people, their thoughts, and their talk. 10/10.

Storyline:Blondie Maxwell is a future anticipation thriller. It explores the consequences of unreasonable use of technology and artificial intelligence while addressing concepts of the ultra uberisation of society and...

Storyline:Sisif, a railwayman, and his son Elie fall in love with the beautiful Norma (who Sisif rescued from a train crash when a baby and raised as his daughter), with tragic results. Originally running nine hours, ...

Storyline:Tony is admitted to a rehabilitation center after a serious ski accident. Dependent on the medical staff and pain relievers, she takes time to look back on a turbulent relationship that she experienced with ...

Storyline:When the accident-prone daughter of a French businessman disappears in Mexico and the detective sent down to find her returns empty-handed, the businessman's company psychologist comes up with an unusual pla...

Storyline:Mrs. Gallienne, a rather temperamental upper middle-class lady, has three children, two of whom she considers as her sons and another she calls Guillaume. Logically indeed, the latter teenage creature does n...

Storyline:Un Ange follows the encounter of a prostitute, Fae, and a world-famous athlete, Thierry.User Reviews: A film about frustrations, fears, love and refuges. A famous Belgian cyclist and a Senegalese prostitute....