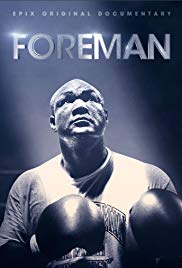 Storyline:
FOREMAN is the definitive feature documentary on legendary boxer and pitchman George Foreman. Framed around his improbable comeback, it begins with his journey from “the Bloody Fifth” in Houston, one of the most violent and dangerous neighborhoods in America, to Olympic gold and the heavyweight championship. But a shocking defeat in “the Rumble in the Jungle” at the hands of Muhammad Ali will change his life forever. Just 28 years old, George Foreman lays down his gloves, retires from boxing, and becomes a preacher on the streets of Houston. For the next ten years, he doesn’t so much as ball his fists, let alone step in the ring – So a decade later, when George, now a minister, pushing 40, and tipping the scales at over 300 pounds, announces that he is not only returning to boxing but will once again become heavyweight champion of the world, he is met with laughter. Thus begins the most unlikely comeback in the history of professional sports, an epic journey that results in George, at…
User Reviews: This film takes you back to the halcyon days of boxing, when boxers had to prove themselves. Might be 2 belts, but each holder wanted undisputed title.So you had epic confrontations between Ali / Frazier / Foreman. These bouts were watched throughout the world even if in the early hours. Tyson was the last to ignite that sort of interest. Now they can fight for 4 or 5 belts and avoid each other, that’s why the non boxing fans have lost interest. But watch this anyway because of George, you watch a man as well as a boxer grow up and mature. Why he’s not proclaimed as a role model for black youth I don’t know, but I could probably guess.